GAME OF THE WEEK Baseball Surges Past Fitchburg, Wins 5-4

Daniel E. Hyatt ’11 followed up a run-scoring double by Thomas M. Phillips ’09 in the eighth with an RBI single to right, as MIT completed a four-run rally en route to a 5-4 victory against Fitchburg State College. The victory capped a sensational season for the Engineers, who set a program record with 25 wins.

Steven M. Nunez ’09 came off the bench to drive in four runs including a base-clearing triple in the fifth inning, as MIT earned the fourth of five consecutive victories with a 9-4 victory over Springfield College at Briggs Field on Tuesday. Rookie pitcher Christopher L. Vaughan ’12 enjoyed his best outing of the campaign after giving up one earned run in 7.1 innings of work while notching his second career win.

With numerous outstanding performances, MIT men’s swimming and diving capped the 2008-09 season with its highest finish at the NCAA Championships in 27 years. The men finished ninth overall in the team standings, while the women’s team also closed out the year with a pair of solid swims.

Engineers Come Back to Beat Rhode Island College in OT, 73-68

MIT freshman William E. “Billy” Bender’s legacy as a clutch performer continues to grow. The rookie knocked down four free throws in the final minute to send Friday’s NCAA Tournament First Round game to overtime before coming up with a steal, a key offensive rebound, and two more free throws in the extra session as MIT stunned nationally-ranked No. 17 Rhode Island College, 73-68, in RIC’s Murray Center.

Farmingdale State advanced to the NCAA Division III Men’s Basketball Tournament Sectional Round for the first time in the program’s history on Saturday, defeating MIT, 67-61, at The Murray Center on the campus of Rhode Island College. Senior guard Damien Santana scored 20 of his team-high 23 points in the first half to lead the Rams’ attack.

After finishing second in the last two NEWMAC Men’s Swimming and Diving Championships, three times proved to be a charm as the Engineers delivered one of the most commanding victories in the history of the meet on Sunday at Wheaton College’s Balfour Auditorium. Scoring 1,030 points to outpace the runner-up, U.S. Coast Guard Academy, by nearly 300 points, MIT secured its first NEWMAC title since 2003 and fourth overall. Following the competition, Rastislav Racz ’10 was named NEWMAC Swimmer of the Year, while Timothy J. Stumbaugh ’12 earned Rookie of the Year honors.

GAME OF THE WEEK Men’s Swimming Ends Its Season Undefeated

MIT men’s swimming and diving, which is ranked No. 11 in the latest Division III national poll, claimed its first undefeated regular season in program history with a convincing victory at No. 19 Amherst College. Paced by two pool records, the Engineers topped the Lord Jeffs, 172-119, while closing out the regular portion of their slate with an 8-0 record.

GAME OF THE WEEK Baseball Rallies in Eleventh Inning, Splits Doubleheader Against Babson

David M. Nole ’09 supplied MIT with its second walk-off hit in as many days as the Engineers rallied to defeat Babson College, 13-12, in 13 innings, to complete a wild nightcap of a baseball doubleheader on March 22. In the opening game, Babson was dominant in a 10-1 victory over the Engineers.

On Monday, the National Collegiate Scouting Association (NCSA) announced its sixth annual Collegiate Power Rankings. Following another pretty good year, the Engineers were listed seventh overall, securing their highest ranking in the history of the report. The NCSA’s 2008 Collegiate Power Rankings rate colleges and universities comprehensively based on student-athlete graduation rates, academic strength, and athletic prowess of the university.

On July 28, and after an 11-hour battle from Dover, England to Cap Griz Nez, France, Clara S. Bennett ’10 joined an elite group by swimming across the English Channel. Bennett became the third MIT student-athlete to successfully complete the grueling, 21-mile swim.

MIT sailing master and coach Fran Charles received the prestigious Graham Hall Award for outstanding service by a college sailing professional this past week at the 2008 Inter-Collegiate Sailing Association/Gill National Championship. As the recipient of this coveted honor, Charles was inducted into the Intercollegiate Sailing Hall of Fame. 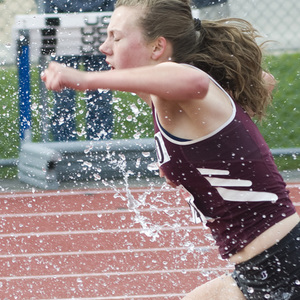 While the men’s track and field team placed 20th out of thirty-eight scoring teams at the 2008 New England Intercollegiate Amateur Athletic Association Outdoor Track and Field Championships, Aline Thomas ’08 is leaving nothing in the tank for the women. 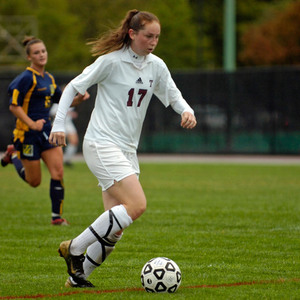 Amy S. Ludlum ’08 delivered a four-goal, 10-point performance that propelled the Engineers to a 6-1 victory over University of Massachusetts Dartmouth on Tuesday at Steinbrenner Stadium. Ludlum, the reigning NEWMAC Player of the Year, scored four times in the first 37 minutes and assisted on another first-half finish as MIT (3-1-0) cruised to its third consecutive win.

Three Tech players scored career highs and MIT shot a staggering 68 percent from beyond the three-point line as the Engineers cruised past Suffolk University, 99-56, on Saturday. 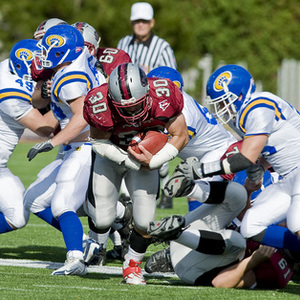 The Steinbrenner Foundation, which helped shape the outdoor landscape at MIT over 30 years ago with a gift leading to the construction of the Institute’s most prominent athletic venue, has made another generous pledge as MIT continues to celebrate the legacy of Henry G. Steinbrenner ’27. The gift will aid in the construction of a new entrance and pathway from Vassar Street to Steinbrenner Stadium and will also include lighting, seating, and a new press box.

Rookie kicker and linebacker Peter W. Gilliland ’12 capped an amazing fourth-quarter comeback with a 37-yard field goal in the driving rain to lead MIT past Nichols College, 43-42, in a New England Football Conference Boyd Division contest at Steinbrenner Stadium on Saturday. The victory marked head coach Dwight Smith’s 100th career win, while MIT upped its record to 3-1 for the first time since 1988.

DeRon M. Brown ’10 rushed for a career-best 251 yards and two touchdowns to lead MIT football to a 42-14 victory over the Massachusetts Maritime Academy on Saturday. Brown followed up last week’s electrifying performance with the second-highest single-game rushing total in school history while the Engineers improved to 2-0 for the first time since 2004.

A gift from the parents of an MIT student-athlete will change the landscape for outdoor competition in the Department of Athletics, Physical Education and Recreation. Bob and Eveline Roberts, whose daughter, Julia N. Roberts ’10, is a midfielder on the women’s soccer team, have pledged $2 million for the installation of synthetic grass turf in Henry G. Steinbrenner ’27 Stadium.

The men’s track and field team secured seven individual victories en route to its eighth consecutive New England Women’s and Men’s Conference Championship. Stephen A. Morton ’10 was the only athlete in the meet to win two events, as the super sophomore captured the top spot in the 100-meter dash and long jump. The women’s track and field fell short in defending its first-ever conference title, finishing third overall. 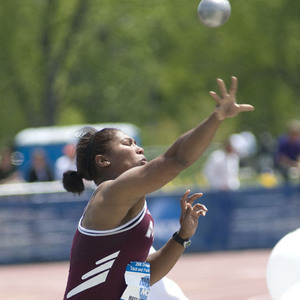 Donning the Cardinal and Gray for the last time, Aline Thomas ’08 and Omari Stephens ’08 (also a <i>Tech</i> senior editor) accounted for all of MIT’s scoring at the pinnacle event in Division III track and field, the NCAA Outdoor Track and Field Championships. Hosted at the University of Wisconsin-Oshkosh from May 22–24, the pair earned All-American accolades. 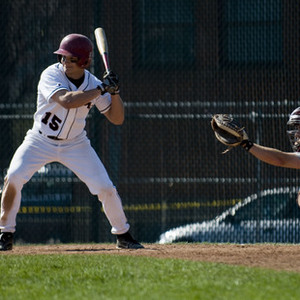 Jay M. Turner ’08 delivered his best start of the spring as MIT’s offense complimented his effort with a strong performance in the first round of the New England Women’s and Men’s Conference Baseball Tournament on Wednesday. The Engineers cruised past Springfield College 11-2. The third-seeded MIT remained in the winner’s bracket of the double-elimination tournament after the win, and travelled to face No. 2 Wheaton College yesterday afternoon.

The Engineers put the finishing touches on their third consecutive top 20 finish at the NCAA Women’s Swimming and Diving Championships on Saturday, while senior Doria M. Holbrook ’08 closed her career as the top diver in Institute history. Holbrook won her eighth All-America honor in as many tries.

Game of the Week: Men’s Basketball Beats Camels In Overtime 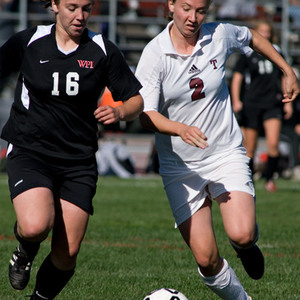 The MIT rifle team swept the University of the Sciences in Philadelphia in both guns on Saturday, picking up where it left off after last week’s solid start against VMI. 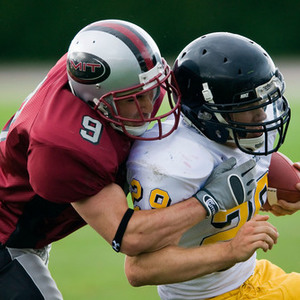 Framingham State sophomore Roland Gervais hauled in a 19-yard touchdown pass from senior Eian Bain with 1:53 left in regulation to cap a late fourth-quarter rally as the Rams upended the MIT football team 17-10 on Saturday at Steinbrenner Stadium. After being kept out of the end zone for the first three quarters, Framingham State (1-1, 1-0) scored 14 points in the final five minutes to push past MIT (0-2, 0-1) in the New England Football Conference opener for both schools. 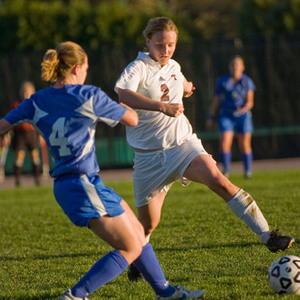 Forward Amy S. Ludlum ’08 scored the 51st goal of her career to ignite the women’s soccer team to a 4-1 victory over Wellesley College. Fittingly, Ludlum’s finish occurred on Senior Day and marked the most career goals by a player in the history of the men’s and women’s programs.

UMass-Dartmouth pounded out 372 yards on the ground and added six rushing touchdowns en route to a 49-14 victory over MIT on Saturday at Steinbrenner Stadium. J.T. Harold led the offensive assault with 137 yards and two scores on 16 carries.

MIT women’s soccer scored four unanswered goals in the second half, powering to a 5-2 victory against Worcester State in the 2007 home opener at Steinbrenner Stadium on Saturday afternoon. Jean E. “Liz” Theurer ’10 and Kathryn A. Pesce ’10 paced a remarkable performance for the Engineers by scoring two goals apiece, while Amy S. Ludlum ’08 also totaled four points to give MIT its second consecutive win. 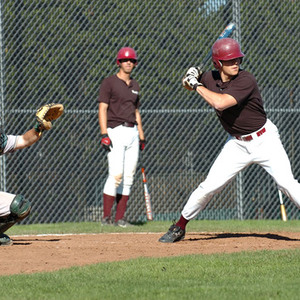 MIT ensured its fourth consecutive winning campaign with a 16-2 victory over Fitchburg State on Tuesday at Briggs Field. Playing in the final game of his collegiate career, Jason T. Witzberger ’07 enjoyed a monster day at the plate, stealing three bases while driving in a career-high seven runs. The Engineers (18-16) plated runners in six of the first seven innings, while Jay M. Turner ’08 and Christopher M. D’Annunzio ’09 combined to hold the Falcon offense to five hits. 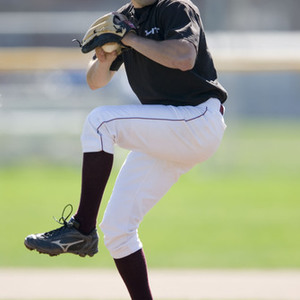 With Help of Mistakes, Baseball Comes From Behind to Beat Rams

Richard D. Kosoglow '08 capped his third year donning the Cardinal and Gray with the best start of his career as he allowed only one earned run in a completing-game victory for MIT this Sunday. The Tech bats also orchestrated several key hits against Suffolk staff ace Reid Jackson and the Engineers hung on to defeat the Rams, 8-5.

MIT (13-11) shrugged off a sluggish first half by scoring 51 in the second as the Engineers rallied to defeat Lasell College (13-10) 76-68 in Rockwell Cage on Tuesday night. James M. Bartolotta '09 had a great night even by his standards, scoring a game-high 27 points and recording a career-high 21 boards.