MIT shuts out Emerson College by a score of 3-0

For the second straight contest, Sean D. Bingham ’16 and Joshua M. Wilson ’18 each found the back of the net as the MIT men’s soccer team defeated Framingham State 2-1, in non-conference action on Tuesday evening at Maple Street Field. With the win, Tech improves to 6-4-4 overall, while the Rams fall to 4-9-2.

For the second year in a row, MIT and Roger Williams University concluded their match in 1-1 tie on Tuesday afternoon at Roberts Field at Steinbrenner Stadium. Morgan K. Moroi ’16 netted her initial goal of the season at 3:29 following a pass from Ashley J. Peter ’15 before Roger Williams countered with a strike by Haley Carignan roughly six minutes later. 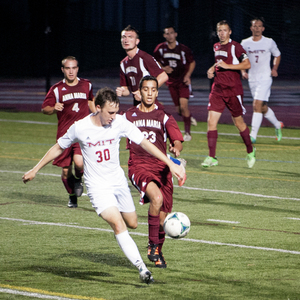 MIT’s men soccer team kicked off their 2014 campaign with a 7-0 non-conference victory over Anna Maria College on Tuesday evening at Roberts Field at Steinbrenner Stadium.