With a loss on Saturday at Endicott College, the MIT football program ends its season at 1-8. After a promising win to open the season, the Engineers were unable to improve on their win total from last year.

Sports program on the rise

The Learfield Sports Directors’ Cup is an annual award given out by the National Association of Collegiate Directors of Athletics, or NACDA. This year, Tech ranked 9th on the list — a significant rise from a position of 60th just four years ago.

This March has seen one of the most exciting NCAA tournaments in recent history, and the championship game was no exception — it was a true nail-biter, keeping fans and spectators on the edge of their seats. In the end, however, midnight struck for the Cinderella Butler Bulldogs, as they were edged by Duke 61-59 Monday evening. The victory gives Duke its fourth national championship, all four of which have come under coach Mike Krzyzewski.

So…I was wrong. As you can see on page 15 in issue 13, my bracket was garbage, and I am here to admit it. Yes, sports fans, garbage.

In the Engineers’ second trip to the Division III NCAA Tournament, they were upset by DeSales University 72-64 Saturday at William Paterson University. The loss is the Cardinal and Grey’s second straight, after a defeat to Clarke University last Saturday in Rockwell Cage in the the NEWMAC tournament.

I somehow managed to wake myself up Saturday morning to attend MIT Sloan’s Sports Analytics Conference at the Boston Convention and Exhibition Center. I ventured into the main conference room and plopped down in one of the back rows, opening my laptop to take notes on a panel discussion on the future of sports ownership.

The bar has been raised, a new precedent has been set, a new sheriff is in town. Whatever cliché you choose to use, there is one undeniable fact: the men’s basketball is for real.

Who cares about men’s basketball?

The MIT men’s basketball team, even after its loss in the NEWMAC tournament this past weekend, are having their most successful year in the program’s 50-plus-year history — did you know?

MIT fell to Clark, 71-59 in the NEWMAC semifinal on Saturday.

MIT is known for many things — engineering, sciences, technology, having incredibly talented writers — but not particularly sports. Barring our recent, unprecedented success in basketball and the success we’ve had in less mainstream sports such as pistol, we’re still known as the land of numbers and more numbers.

Alex F. Rubino ’10 and Brian P. Doyle ’11 were named as <i>ESPN The Magazine</i> College Sports Information Directors of America (CoSIDA) Academic All-Americans. Both received All-NEFC accolades for their performances on the field and being named to the first team All-District for their success in the classroom last week. Rubino, a third-year starter, is receiving the award for the second time, this year on the first team, while Doyle finds his way onto the second team for the first time in his career.

MIT will be hosting an Athletics Weekend this weekend to emphasize Tech’s winter sports. Headlining the event will be the men’s and women’s basketball teams. The MIT basketball programs have been able to raise the school spirit and unite the student body, creating some much needed athletic buzz across campus.

Seven Engineers were honored by the New England Football Conference for their achievements both on and off the field.

Football Closes Season With Loss to Endicott; Looks Ahead to Next Year

On their Senior Night, the Endicott College Gulls held the MIT Engineers to 107 yards of total offense after All-American Captain DeRon M. Brown ’10 was knocked out of the game with a concussion after rushing for only three yards on nine carries. The game was won by Endicott, 27-10.

MIT Cable offers MTV, MTV2, MTVU, (though no guarantee of actual music with three MTV stations) Telefutura, China Central Television, and TVJapan; whether duplicates or foreign channels, MIT shows a desire to appeal to all students. It even offers the NASA channel for those Course 16 NASA dreamers who may watch in awe.

In a one hour, 52 minute contest on Saturday, the Engineers fell to the Plymouth State University Panthers on the Panthers’ Senior Day in New Hampshire. Both teams were coming off of a tough loss looking to redeem themselves. The Panthers, who saw their conference title hopes dashed with a loss against Curry College last week, were looking for a win for their seniors on the final home game of the year. The Engineers were coming off of a disappointing loss in their final home game and Senior Day to the Seahawks of Salve Regina.

On a dreary, rainy Saturday, the MIT Engineers stepped onto Roberts Field in Steinbrenner Stadium for the final time this season. The game’s final result was a loss to Salve Regina University 28-10.

The MIT Engineers arrived in Springfield this past weekend looking to spoil Western New England College’s homecoming, but the Golden Bears proved to be too much for Tech. The stands were filled to watch the Golden Bears defeat the Cardinal and Grey 59-21.

The football team lost its game against Curry College on Saturday 20-10. 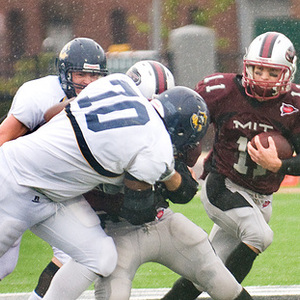 When the MIT Engineers took the field Saturday, they were not only competing against the University of Massachusetts-Dartmouth Corsairs, but also the weather — reminiscent of their first storm-delayed game three weeks ago at Massachusetts Maritime Academy. This time, however, the Engineers’ impressive performance both offensively and defensively led them to a shutout victory over UMass-Dartmouth — the first win over the Corsairs in a decade.

MIT to Showcase Fall Sports at Athletics Weekend on Saturday

This Saturday, MIT will hold its annual Fall Athletics Weekend to highlight fall varsity sports. They will be showcasing three of the most prominent fall sports — men’s football, women’s field hockey, and men’s soccer — throughout the day, with fun activities and events for fans. The festivities will begin at 12:30 p.m. outside the Zesiger Sports and Fitness Center with a basketball shooting contest and pull-up contest. Participants and MIT sports fans will be given free lunch as well as markers and poster board to make signs for their favorite MIT players and teams.

The MIT Engineers lost Saturday to the Nichols College Bisons at Nichols’ homecoming game 31-19. The Engineers came out strong, forcing a three-and-out right and responding by driving the ball down the field. The momentum was stifled, however, when MIT kicker Peter W. Gilliland ’12’s kick hit off the left upright. The Bisons, lead by quarterback Sean Smith-Vaughn, were able to drive downfield and take the lead on a 25-yard field goal. 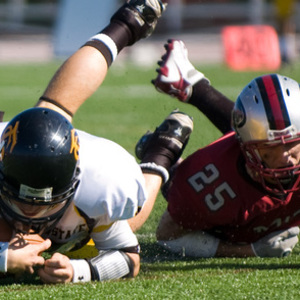 The crowd was in full force as the Rams of Framingham State University entered Steinbrenner Stadium at 1 p.m. on Saturday for the Engineers’ home opener. With fans in full body paint and the band in uniform, the Engineers came out in a spirited defensive struggle.