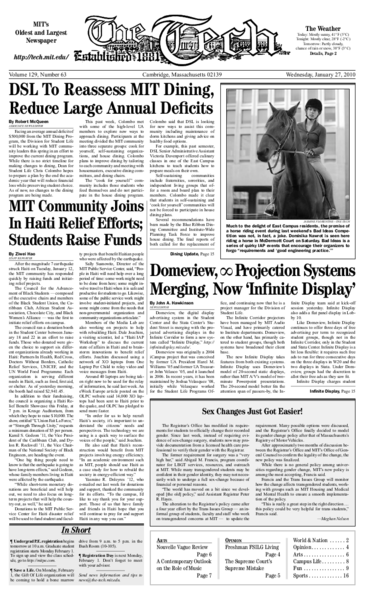 Domeview, the digital display advertising system in the Student Center and the Stata Center’s Student Street is merging with the projected advertising displays in the Infinite Corridor to form a new system called “Infinite Display,” http://infinitedisplay.mit.edu/.

The Registrar’s Office has modified its requirements for students to officially change their recorded gender. Since last week, instead of requiring evidence of sex-change surgery, students now may provide documentation from a licensed health care professional to verify their gender with the Registrar.

After the magnitude 7 earthquake struck Haiti on Tuesday, January 12, the MIT community has responded quickly by raising funds and initiating relief projects.

Facing an average annual deficit of $500,000 from the MIT Dining Program, the Division for Student Life will be working with MIT community leaders this spring in an effort to improve the current dining program. While there is no strict timeline for making changes to dining, Dean for Student Life Chris Colombo hopes to prepare a plan by the end the academic year that will reduce financial loss while preserving student choice. As of now, no changes to the dining program are being made.

Random Hall, MIT’s smallest dorm, is unique from other MIT dormitories in that it provides residents with “free” use of its laundry facilities. But since finals week of last term, all but one of the washers has been out of commission, generating a stir among Random’s 93 residents.

In New Jersey, 36 cancer patients at a veterans hospital in East Orange were overradiated – and 20 more received substandard treatment – by a medical team that lacked experience in using a machine that generated high-powered beams of radiation. The mistakes, which have not been publicly reported, continued for months because the hospital had no system in place to catch the errors.

Pearl Art and Crafts Goes Under

Cambridge art and craft mecca Pearl Art is going out of business this week. The store is offering 75 percent discounts, and has been mobbed with customers waiting in lines at the register for more than an hour long last night.

Once Pay is Divvied Up, Little is Left for Banks’ Shareholders

Finding the winners on Wall Street is usually as simple as looking at pay. Rarely are bankers who lose money paid as well as those who make it.

Rising Criticism for Both Deficit and Solutions

Advocates of more aggressive steps to address the national debt failed on Tuesday in their effort to create a bipartisan commission to press for tax increases and spending cuts, but President Barack Obama now plans to establish a similar panel by executive order in his State of the Union address on Wednesday.

Haiti’s Quake Set Children Adrift In a World of Chaos

Not long after 14-year-old Daphne Joseph escaped her collapsed house on the day of the earthquake, she boarded a crowded jitney with her uncle and crawled in traffic toward the capital, where her single mother sold beauty products in the Tete Boeuf marketplace. “Mama,” she said she repeated to herself. “Mama, I’m coming.”

The tiny village of Kivalina, Alaska, does not have a hotel, a restaurant or a movie theater. But it has a very big lawsuit that might affect the way the nation deals with climate change.

James Cameron’s science-fiction epic “Avatar” has passed his “Titanic” to become history’s highest-grossing film, with a sizable boost from higher-priced tickets for 3-D and Imax showings.

With no clear path forward on major health care legislation, Democratic leaders in Congress effectively slammed the brakes on President Barack Obama’s top domestic priority on Tuesday, saying they no longer felt pressure to move quickly on a health bill after eight months of setting deadlines and missing them.

Return of the Freeze

The small warm-up that has occurred in the Boston area at the beginning of this week has had many people thinking that the worst part of the winter is over, and that spring is just around the corner. With temperatures in the 50s°F (above 10°C) for most of the day on Monday, several parts of the Charles River have even begun to unfreeze.

On Thursday, January 21, the Supreme Court, under the excuse of “freedom of speech,” invited heightened levels of corruption back into political campaigns with a ruling that has the potential to damage the democratic system of elections. In 2002, the Bipartisan Campaign Reform Act, usually referred to as the McCain-Feingold Act, was passed by Congress. This landmark legislation prohibited corporations and labor unions from using their money to run ads supporting or opposing election candidates in the 30 days before a presidential primary and in the 60 days before general elections. After Thursday’s ruling, which struck down this part of the law, in addition to two previous rulings supporting it, big business was handed a political megaphone with which it could both drown out the average citizen and try to control politicians to an even greater extent than it does today.

Late to the Party

The french politician Alexandre Ledru-Rollin, upon seeing a crowd marching through Paris, supposedly once said: “There go my people. I must find out where they’re going so I can lead them.” In the wake of their humiliating defeat in Massachusetts, many Democratic strategists are now embracing the spirit of Ledru-Rollin, urging their party to adopt a more “Main Street” tone in order to survive the mid-term elections this November.

Let’s Regulate the Freshmen in FSILGs.

An unknown number of second-semester freshmen choose to live in their fraternities, technically breaking MIT rules, and the Institute does not regulate the practice. Everyone knows about it. Regulating the practice, rather than pretending it does not exist, would protect MIT students from whatever risks it may incur.

EXHIBIT REVIEW A Contemporary Outlook On the Role of Music

Music pervades our lives, but is it more than just an accessory? How do you know that it is anything more than a presence in your pocket, barrier to unwanted noise, or to make up for the expanse of empty wall space? The “Seeing Songs” exhibition at Boston’s Museum of Fine Arts delves into the role of music as an integral part of our lives. 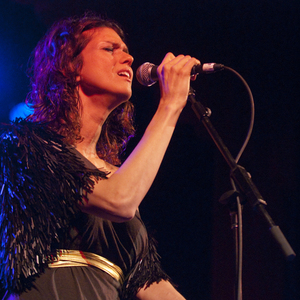 CONCERT REVIEW All Covers, All the Time

Sunday night at Somerville Theatre saw an eclectic pairing of the young Clare and the Reasons with the more experienced bossa-jukebox of Nouvelle Vague. In support of their second album <i>Arrow</i>, Clare Manchon, her co-collaborator husband Olivier Manchon and multi-instrumentalist Bob Hart opened the night with a set of mellow numbers. With Ms. Manchon’s voice the primary foundation for most songs, the backing “Reasons” shuffled between xylophones, violin, makeshift drumkits, keyboards, and even a bowed saw to fill in the gaps. Melodies, such as the chorus for “Ooh You Hurt Me So,” are easy to grasp, albeit due to its repetitive nature. While the songs were simplistic, Ms. Manchon’s lyrics are readily candid and conversational. She even sings a few songs in French, her husbands native language. The last three songs comprised what Ms. Manchon dubbed the “scientific portion of the spectacular,” a closing set which kicked off with the tongue-in-cheek “Pluto.” The song begins in French, addressing the late planet and its recent reconsideration-of-planethood as reported by the <i>New York Times</i>. The verse is then repeated, in English, fully clarifying the message of the song for the majority of the audience.

Jeremy Denk? Accompanist? Before you scoff:

INTERVIEW Many Reasons to Love Boston

Clare Manchon, lead vocalist and songwriter of Clare and The Reasons, answered a few of <i>The Tech</i>’s questions after supporting Nouvelle Vague at Somerville Theatre on Sunday.

I’m a big fan of hip hop. I mean real hip hop, not the buckets of factory-produced horse vomit that passes off as mainstream radio these days. In particular, the next time I hear Jason Derulo say his own name, I will strongly consider seceding from the U.S. But give me a good hip hop album, be it afrocentric, alternative, fusion, gangsta, or political, and I’ll be a happy camper for weeks. Good rappers like Talib Kweli, Mos Def, Nas, and Lupe speak from the soul, and it’s always a treat to peer introspectively into their minds. But part of the pleasure comes from the fact that I’ve got almost nothing in common with the artist. I never grew up in the projects. I don’t know what it’s like to have a gun by my side at all times, and I’ve never gone hungry from lack of money. So what can I expect in an album by a middle-class, suburban hipster from Cleveland, Ohio?

I’ve never been very good at grocery shopping. For one thing, I’m constantly snacking, which means that walking down the chips and cookies aisle is just asking to load up on more munchies. For another, there’s so much variety in products that I can’t tell what’s inexpensive and what’s a ripoff. Music and movie shopping are easy by comparison — anything under fifteen dollars is a bargain (except perhaps <i>Plan 9 From Outer Space</i>), anything under five dollars is a steal — but groceries are a different beast altogether. Even considering that I’d watched <i>Supermarket Sweep </i>as a child, I was much more interested in the “run like a maniac around the supermarket” than the expected retail prices of anything. For instance, the Oreos at Shaw’s are in yellow-tag Purgatory, meaning that it’s always the same price every time I go, and seemingly have been for the past three years. Whether that means they’re actually never on sale or perpetually on sale, I leave to you to decide. 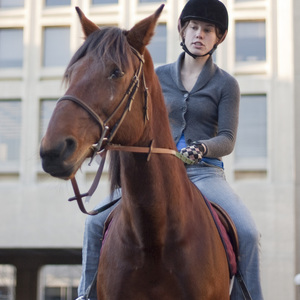 Much to the delight of East Campus residents, the promise of a horse riding event during last weekend’s Bad Ideas Competition was not, in fact, a joke. Dominika Nawrot is seen here riding a horse in McDermott Court on...
Jasmine Florentine—The Tech 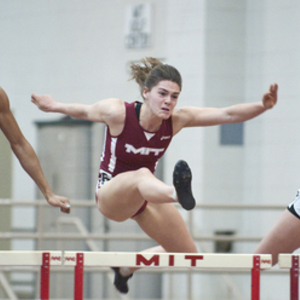 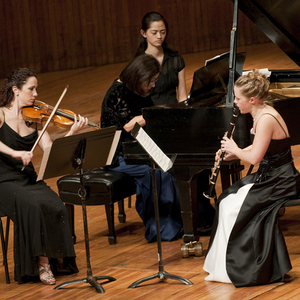 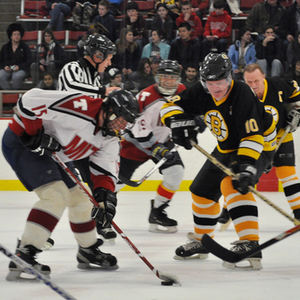 Saturday evening, alumni of the MIT Ice Hockey program faced off against alumni of the Boston Bruins in a fundraising event for the current MIT team. The Bruins won 13-11. MIT alumni from as early as the Class of 1966...
Aaron Thom—The Tech
All Photos From Issue