Tagged "player of the month"

Arinze Okeke on long jumping and what it takes to win

Arinze C. Okeke ’18 won individual golds in the triple and long jumps at the recently-concluded New England Division III Indoor Championships and is in line to represent MIT at the NCAA Division III national meet. Okeke has taken major strides since entering the track scene in his high school days. Now he has set his sight on a first-place finish at the national meet. 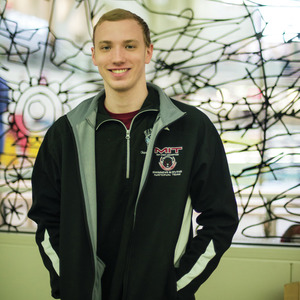 Douglas A. Kogut ’18 won the 200-fly individual title at the recently-concluded NCAA Division III national meet, thereby becoming the first student athlete from MIT to win a title in that category and fourth to win an individual event at the national meet. His time of 1:47:28 was both a personal and a school record and he clinched it when the spotlight shone brightest. He was also part of the 400-free relay team that won silver.

Ullmann spoke about the incredible support system that the women’s soccer team has always provided, how the team tries to play its best on the field when the firehose is at its fiercest off the field, and her evolution as a leader, teammate, and friend both on and off the pitch.

McCandless ’20 is NEWMAC runner of the year

Megan McCandless ’20 has made a tremendous start to her career as a student-athlete at MIT. She led a group of five Engineers who swept the top five positions in the New England Women’s and Men’s Athletic Conference (NEWMAC) cross country championship, earning her both the NEWMAC rookie and runner of the year accolades.

MIT Football played two games in the month of November. They earned a win against Curry College 26-21, and took a tough double-overtime 36-35 loss to Nichols College. The Engineers rode on an offensive outburst from running back John Robertson ’20, who ran for a total of 328 yards with six touchdowns in his two November games. He closed out his stellar rookie season by recording four consecutive games in which he rushed for at least 100 yards. He ended the season with a total of 920 yards and 11 touchdowns, earned the NEFC Offensive Rookie of the Week honors twice, NEFC Offensive Player of the Week honors once, and was one of the seven Engineers to make an appearance on an NEFC All-Conference Team as MIT Football finished the season with a 3-7 overall record.