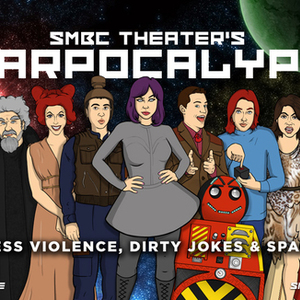 Of aliens and orgasms

Fans of Saturday Morning Breakfast Cereal (SMBC) rejoice — the long awaited, crowd-funded webcomic series has finally launched! Starpocalypse, the first of three series, is a space opera set in the far future where the last liberal arts professor and his brother, a physics professor, have outlived their usefulness to a society where everyone can achieve instant orgasms through existing technology. In a desperate attempt to find some purpose for philosophy, they encounter a being in outer space who claims that she is the long-lost god who created humanity. But she’s entirely mad and takes them hostage. They can either refuse to take her to Earth and die a painful, head exploding death or rely on their academic prowess to convince her to spare humanity and humanity to worship her. After all, any sufficiently advanced alien is indistinguishable from god.