Slow transaction processing and a burgeoning “hidden deficit” caused the UA to overestimate its available funds each fiscal year since 2011, according to an Institute audit that UA President Matthew J. Davis ’16 released to undergraduates Tuesday. 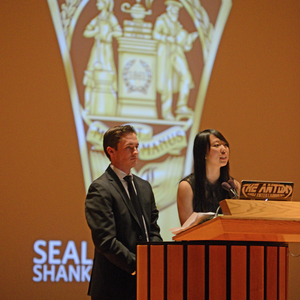 Little could have inspired me and so many other sophomores to brave the freezing temperatures and inclement winds last Friday evening, save the highly anticipated premiere of the Class of 2017 Brass Rat. I arrived at Kresge Auditorium at 6:30 p.m., half an hour before the doors opened, to wait outside with my fellow ’17s; the semi-organized line of sophomores soon began to curve around Kresge and extend toward the Z Center.

Bexley demolition to begin next summer

The demolition of Bexley Hall is projected to take place in the summer of 2015 according to MIT, but the site will have a temporary use before a permanent structure is built there.

No. 6 rejoins IFC after years away

MIT’s fourth oldest fraternity, The Number Six Club (No. 6), has rejoined the Interfraternity Council after being an Independent Living Group for almost six years. No. 6, MIT’s chapter of Delta Psi, had left the IFC in 2008 due to disagreements over the Clearinghouse system used during Rush.