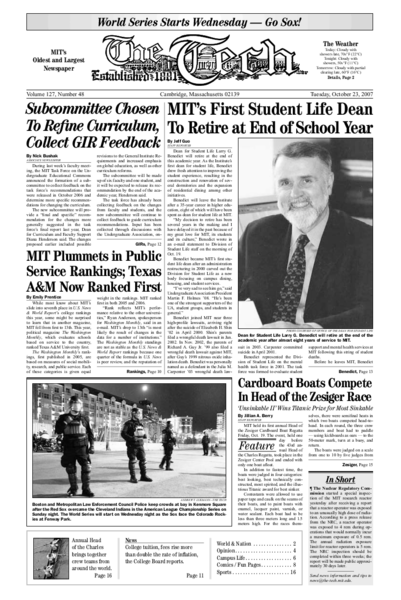 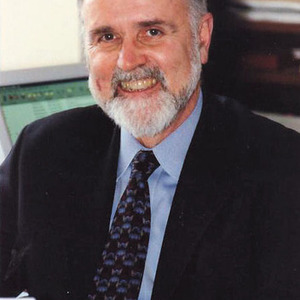 Dean for Student Life Larry G. Benedict will retire at the end of this academic year. As the Institute’s first dean for student life, Benedict drew fresh attention to improving the student experience, resulting in the construction and renovation of several dormitories and the expansion of residential dining among other initiatives.

College Tuition Rising at More Than Double the Inflation Rate

Tuition and fees at public and private colleges and universities rose at more than double the rate of inflation, the College Board said in reports released Monday morning.

While most know about MIT’s slide into seventh place in <i>U.S. News & World Report</i>’s college rankings this year, some might be surprised to learn that in another magazine, MIT fell from first to 13th. This year, political magazine <i>The Washington Monthly</i>, which evaluates schools based on service to the country, ranked Texas A&M University first. 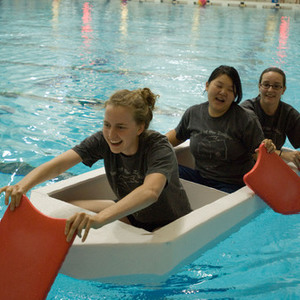 Cardboard Boats Compete In Head of the Zesiger Race

During last week’s faculty meeting, the MIT Task Force on the Undergraduate Educational Commons announced the formation of a subcommittee to collect feedback on the task force’s recommendations that were released in October 2006 and determine more specific recommendations for changing the curriculum.

More women with breast cancer are choosing to have their healthy breast surgically removed along with their affected breast, a new study has found. Almost 5 percent of patients decided to have the radical procedure in 2003, up from just under 2 percent in 1998.

Microsoft has given up its nine-year fight against antitrust regulators in Europe, saying Monday that it would not challenge a court judgment from last month and would share technical information with rivals on terms the software giant had long resisted.

Executives at the two biggest phone companies contributed more than $42,000 in political donations to Sen. Jay Rockefeller, D-W.Va., this year while seeking his support for legal immunity for businesses participating in National Security Agency eavesdropping.

Energy experts convened by the world’s scientific academies Monday urged nations to shift swiftly away from coal and other fuels that are the main source of climate-warming greenhouse gases and to provide new energy options for the two billion people who still mostly cook in the dark on wood or dung fires.

At Qualcomm Stadium, to which thousands of evacuees fled throughout the day Monday to escape approaching fires, the hazy and acrid air pinched the throat. Despite those reminders of the nearby inferno, the stadium seemed an oasis of order.

President Bush asked Congress on Monday to approve $196 billion to pay for the wars in Iraq and Afghanistan and other national security programs, setting the stage for a new confrontation with Democrats over the administration’s handling of Iraq.

Conflict Simmers on a Second Kurdish Front in Northern Iraq

Deadly raids into Turkey by Kurdish militants holed up in northern Iraq are the focus of urgent diplomacy, with Turkey threatening invasion of Iraq and the United States begging for restraint while expressing solidarity with Turkish anger.

Yesterday’s highs approached, and in some cases surpassed, the 80 degree mark yet again. Logan reached 81 degrees, nearly tying its record of 83 set in 1979. In fact, October to date has averaged more than 5 degrees above normal. Yesterday’s warm readings were typical of late June; our average highs should be near 60°F for late October, with average lows in the mid 40s°F. You can thank the unusual warmth of late on a persistent high pressure pattern that has been advecting the warm air into the Northeast. The warm air advection will be suppressed today by the passage of a cold front, bringing us a period of showers late this afternoon and evening. Expect the rest of the week to be more seasonable and pleasant. Our next chance of rain comes this weekend as a slow-moving system currently in the southern Plains moves our way.

Why the U.S. and Israel Are Strong Allies

The value that the U.S.-Israel relationship has to both partners of the alliance is incalculable not only because of its strategic importance, but also because it projects values that matter deeply to the American people.

There’s nothing like the lack of supervision, combined with a healthy workload, to help me realize how I work best. I’ve already taken great joy in flouting virtually every study habit I’ve ever been told about, like not listening to music with lyrics, or working at my desk instead of on the dinner table (although due to a lack of adequate cash flow for furniture, the two are the same as often as not). When better than college to twiddle with different ways to tool in search of the optimal learning method?

OK, so a turkey hangs out in Kendall Square. Big deal — I’ve seen a lot of turkeys in my lifetime. Maybe that’s just because I grew up on a rural Minnesota farm, but that isn’t an explanation for why barely anyone around here seems to know what a turkey is. You see, I walked down the path that leads past Quantum Books into East Cambridge twice a day for over a year. In that time, I saw some pretty strange episodes involving the Kendall Square turkey, affectionately known as Mr. Gobbles. I’ve seen him walking, running, flying, sleeping, munching on grass, and being chased by everyone from obese women to skinny kids. 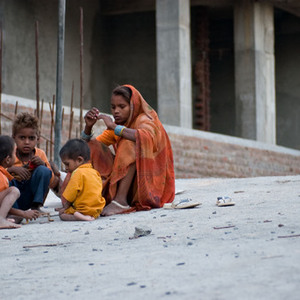 Though my summer was extraordinary, it was also heartrendingly eye-opening. It was more than the suffocating heat, nauseating odor, and hordes of flies. Our group was welcomed by most people, but sometimes I’d find older women gazing scornfully at me, a foreigner marching in with an expensive-looking camera, here to take pictures of their pitiful living conditions.

Bad things exist along a spectrum. A flat tire in a thunderstorm is unpleasant. Getting jilted hurts really bad. Getting stuck on a bus to New York for eight hours, now, that’s interminably bad. 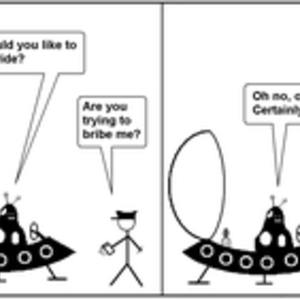 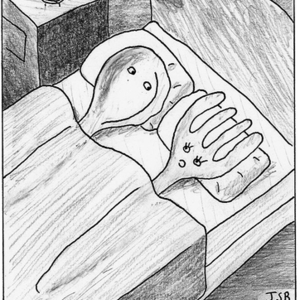 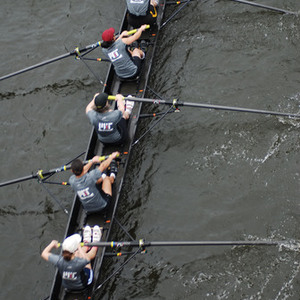 MIT Sloan Crew Club position themselves at the starting line for the Club Women’s Eights on Saturday, Oct. 20 during the 43rd annual Head of the Charles Regatta, held this past weekend. Over 1,700 boats completed the ...
Diane Rak—The Tech 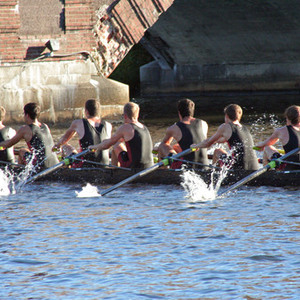 The MIT heavyweight crew team passes the Weeks Footbridge on Sunday, Oct. 21 during the 43rd annual Head of the Charles Regatta, held this past weekend. Over 1,700 boats completed the 3-mile course, which starts at th...
Ramya Sankar 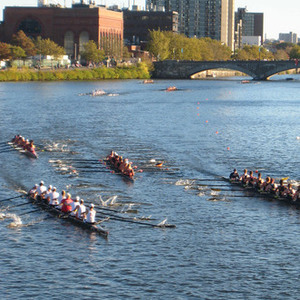 Crew teams race at the 43rd Head of the Charles Regatta this past weekend. Over 1,700 boats completed the 3-mile course which starts at the Boston University DeWolfe Boathouse and ends past Eliot Bridge.
Helen Hou 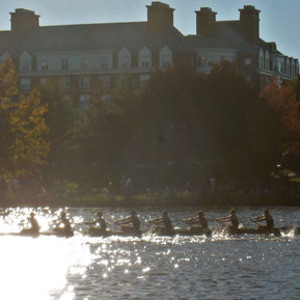 MIT men’s heavyweight crew glimmers in the sun in the Championship Men’s Eights race on Sunday, Oct. 21 during the 43rd annual Head of the Charles Regatta, held this past weekend. Over 1,700 boats completed the 3-mile...
Helen Hou

A young mother watches over her children at a construction site. The children glance longingly at the bright McDonald’s restaurant next to them as people eat behind the large, sparkling windows.
Christina Kang—The Tech 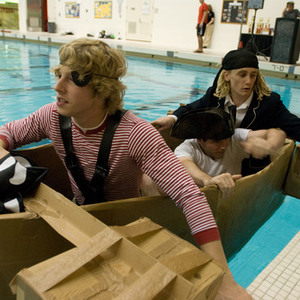 Gavin M. Cotter ’09, Stephen P. Fournier ’09, and Alan D. Foreman ’09 (left to right) enter their boat, The Black Pearl, at the start of the final race at the Head of the Zesiger Cardboard Boat Regatta on Friday, Oct....
David M. Templeton—The Tech 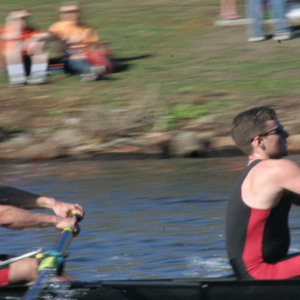 Ryan M. Daspit ’09 (left) and Ryan A. Flynn ’10 (right) row with the men’s lightweight crew team on Sunday, Oct. 21 during the 43rd annual Head of the Charles Regatta, held this past weekend. Over 1,700 boats complete...
Ramya Sankar 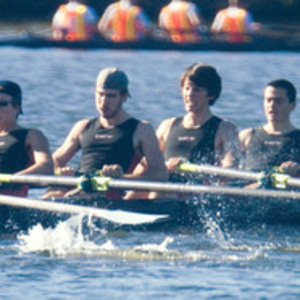 The MIT lightweight crew team charges up the Charles River in the Lightweight Men’s Eights race on Sunday, Oct. 21 during the 43rd annual Head of the Charles Regatta, held this past weekend. The team finished 21st wit...
Brian Hemond—The Tech 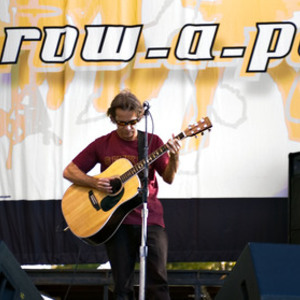 Guitarist Tim Reynolds, founder of the band TR3, headlines the 2007 Row-A-Palooza concert on Sunday, Oct. 21. The 43rd annual Head of the Charles Regatta was held this past weekend. Over 1,700 boats completed the 3-mi...
Diana Ye—The Tech 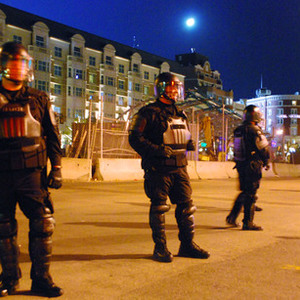 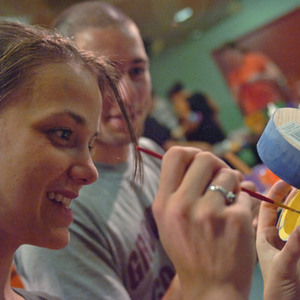