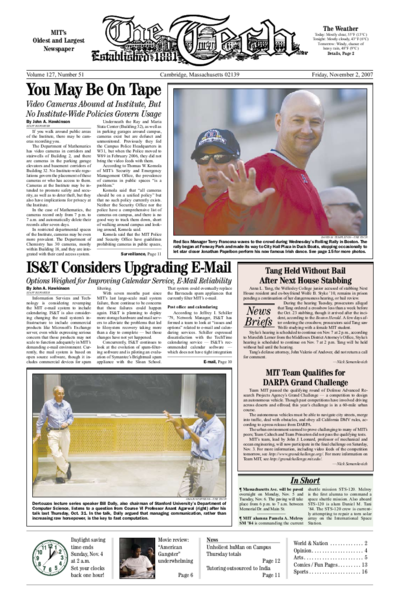 Anna L. Tang, the Wellesley College junior accused of stabbing Next House resident and ex-boyfriend Wolfe B. Styke ’10, remains in prison pending a continuation of her dangerousness hearing, or bail review.

UMOC Donations as of Thursday, Nov. 1

UMOC Donations as of Thursday, Nov. 1

Information Services and Technology is considering revamping the MIT e-mail system to include calendaring. IS&T is also considering changing the mail system’s infrastructure to include commercial products like Microsoft’s Exchange server, even while expressing serious concern that those products may not scale to function adequately in MIT’s demanding e-mail environment. Currently, the mail system is based on open source software, though it includes commercial devices for spam filtering.

Adrianne Yamaki, a 32-year-old management consultant in New York, travels constantly and logs 80-hour workweeks. So to eke out more time for herself, she routinely farms out the administrative chores of her life — making travel arrangements, hair appointments and restaurant reservations and buying theater tickets — to a personal assistant service, in India.

You May Be On Tape

If you walk around public areas of the Institute, there may be cameras recording you.

Massachusetts Ave. will be paved overnight on Monday, Nov. 5 and Tuesday, Nov. 6. The paving will take place from 6 p.m. to 7 a.m. between Memorial Dr. and Main St.

For much of the last century, the mountainous region of Swat was ruled as a princely kingdom where a benign autocrat, the wali, bestowed schools for girls, health care for everyone and the chance to get a degree abroad for the talented.

London’s police force on Thursday was found guilty of putting the public at risk during a flawed counterterrorism operation in 2005 that led to the killing of an innocent Brazilian electrician on a subway train.

Japan’s Defense Ministry ordered home its naval ships from the Indian Ocean on Thursday, ending for now a six-year mission in support of the war in Afghanistan that raised the nation’s military presence overseas but has recently drawn increasing criticism domestically.

A day that dawned bleakly on Wall Street turned even darker late Thursday as an afternoon sell-off sent the Dow Jones industrial average down more than 360 points, or 2.6 percent. Investors worried that Citigroup’s woes might be worsening and that consumers would not spend freely this holiday shopping season.

Stephen Colbert’s nascent and satirical presidential campaign came to an abrupt end on Thursday when the Democratic Party in South Carolina decided he was not serious and turned down his application to get his name on the primary ballot.

The most interesting aspect of today’s forecast is the possibility that we will see firsthand some of the effects of Noel (officially a hurricane by yesterday at 8 p.m.). As the tropical storm transitions into an extratropical cyclone, it will weaken back to tropical storm strength, to later intensify into hurricane force winds by Saturday afternoon. By Saturday at 5 p.m., the center storm will (most likely) pass at about 150 miles from the coast of Massachusetts with some models (those with the westernmost trajectories) giving even hurricane force winds for the Cape and tropical storm winds for Boston. The exact trajectory of the storm is at this moment uncertain, but there is the potential of significant wind related disruptions for Saturday afternoon and evening, so plan your activities accordingly and stay tuned to the latest forecasts.

Administration Starts an Effort To Save Mukasey’s Nomination

The White House began a campaign Thursday to save the candidacy of Michael B. Mukasey for attorney general, with President Bush defending the nominee in a speech and in an Oval Office interview, where he complained that Mukasey is “not being treated fairly” on Capitol Hill.

Thank you very much for providing coverage on the upcoming Cambridge City Council election (“City Councillors Seek New 2-Year Terms in Cambridge Elections,” Oct. 30, 2007). It is quite important to engage the MIT community in expressing its preferences for those who will lead the City of Cambridge for the next two years. It is unfortunate that <i>The Tech</i> seems to have decided that the race for School Committee is not worth covering in the same manner. In fact, the quality of life for graduates students and faculty members with school age children is affected deeply by the quality of the Cambridge Public Schools, and voters should take just a much care in voting for School Committee as in voting for City Council. It is my hope that all MIT affiliates who are Cambridge voters will vote their preferences on Tuesday, Nov. 6.

Some great (and cheap) concerts coming to you in the Boston area this November. Special interest shows are noted with stars. Send listing suggestions for this month and the future to <i>arts@tech.mit.edu</i>.

Two Fridays ago, I took advantage of one of the numerous arts events that take place on our very own campus. You don’t have to go very far to discover a new performance at MIT — just check the MIT arts newsletter. I was surprised when a handful of my arts-inclined friends didn’t even know such a newsletter existed. Killian Hall (14W-111) serves as a home to many local performers, and Charles Bubeck and Daniel Ian Smith are no strangers to the intimate and cozy performance space we’re blessed with at MIT. 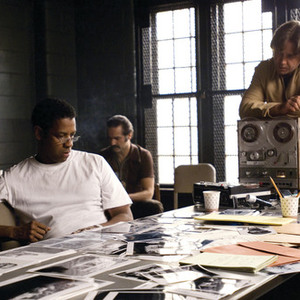 Underwhelming. Despite its star-studded cast, “American Gangster” fails to deliver. Its story — based on a feature in <i>New York Magazine</i> ­­— chronicles the rise and fall of Frank Lucas (played by Denzel Washington), a shrewd and intelligent 1970s Harlem heroin operation mastermind. Lucas climbs his way to the top when he imports heroin directly from Southeast Asia, rather than working through the usual channels, offering a better product at cheaper prices. Inspired by the Mafia’s model, he brings his family up from North Carolina to run the operation, and he is extremely successful. That is, until Richie Roberts (Russell Crowe), seemingly the only honest cop in all of New York and New Jersey, is assigned to investigate the case.

Jens Lekman was magical. Every moment he was on stage, the room seemed to get brighter and happier. Even though Paradise Lounge was packed to the gills, a gentle harmony effused through the room. The crowd danced side by side, and no one seemed to mind the throngs of hipsters pushing their way up front. It must’ve been the Jens Lekman effect.

Last weekend, I saw Itzhak Perlman, the Israeli-American violinist and conductor, perform live. It was the first time I’d seen him live, although I grew up listening to recordings of his playing, and I was not disappointed. The concert, part of the Boston Celebrity Series, had Symphony Hall packed with people eager to see a living legend of classical music. 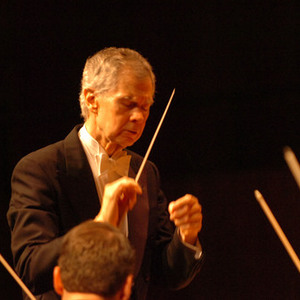 Leave it to the New England Philharmonic and its director, Richard Pittman, to come up with a bold program. Living up to the adventurous reputation that has repeatedly earned them awards and accolades in the recent past, they prepared a unique program for their Oct. 27 program held in Kresge Auditorium at MIT.

MIT, ranked No. 25 nationally, defeated Mount Holyoke College, 30-10, 30-19, 30-22, in a New England Women’s and Men’s Athletic Conference Women’s Volleyball Championship Tournament quarterfinal match on Tuesday. The Engineers (33-1) will host the remainder of the tournament and square off with U.S. Coast Guard Academy at 5 p.m. today in a semifinal match up.

The MIT Sport Taekwondo Club hosted the first tournament of the Ivy Northeast Collegiate Taekwondo League season on Sunday, Oct. 14. The tournament was attended by colleges from throughout the northeast. MIT finished with 484 points, behind only Cornell University with 698. In third place was Harvard University with 148 points. 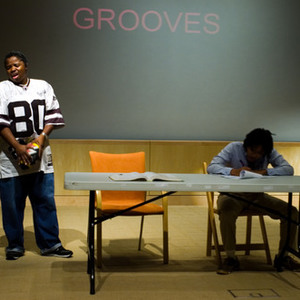 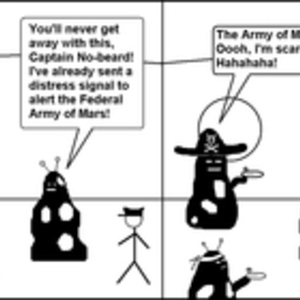 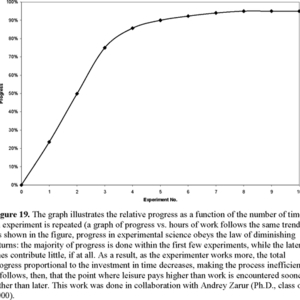 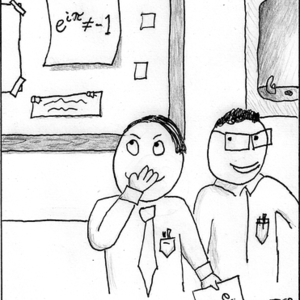 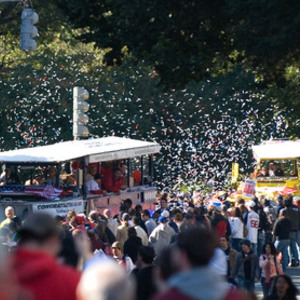 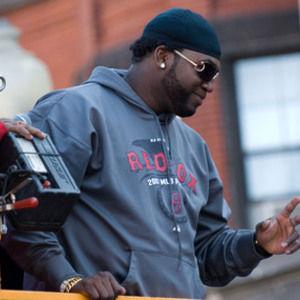 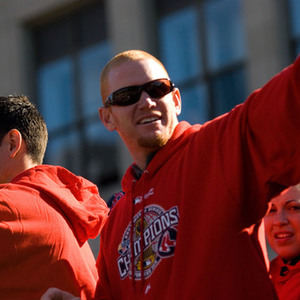 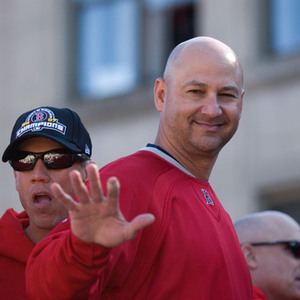 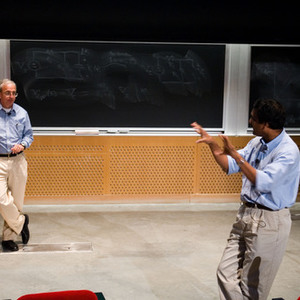 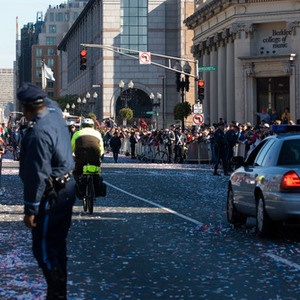 Thousands of fans line Boylston St. eagerly trying to see the 2007 World Champion Red Sox as they pass during Wednesday’s Rolling Rally. The rally began at Fenway Park and made its way to City Hall Plaza in Duck Boats...
David M. Templeton—The Tech
All Photos From Issue