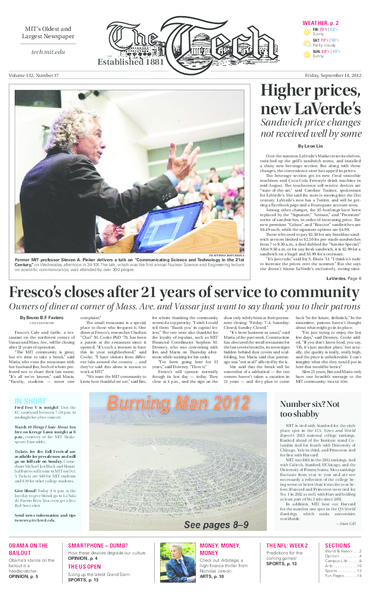 Over the summer, LaVerde’s Market reset its shelves, switched up the grill’s sandwich menu, and installed a shiny new beverage section. But along with those changes, the convenience store has upped its prices.

The destruction wrought by Hurricane Isaac — with its 11-foot surge, seven dead, power knocked out in half of Louisiana and nearly $2 billion in damage - has renewed debate among forecasters about how best to warn people of coming storms.

The iPhone 5 has plenty of new features to keep Apple fans happy. But there is one feature Apple unveiled on Wednesday that is likely to annoy many: a new connector on the phone’s base.

Fresco’s closes after 21 years of service to community

Fresco’s Cafe and Grille, a restaurant on the northwest corner of Vassar and Mass. Ave., will be closing after 21 years of operation.

Number six? Not too shabby

MIT is tied with Stanford for the sixth place spot in the U.S. News and World Report’s 2013 national college rankings. Ranked ahead of the Institute stand Columbia tied for fourth with University of Chicago, Yale in third, and Princeton tied for first with Harvard.

Fred Fest V is tonight! Visit the EC courtyard between 7:30 p.m. to midnight for a free concert.

MEXICO CITY — In a major strike against one of the largest drug-trafficking organizations, the Mexican navy said Thursday that it had detained one of the most sought-after drug kingpins in Mexico and the United States, the top leader of the Gulf Cartel.

BENGHAZI, Libya ­— The mayhem here that killed four U.S. diplomatic personnel, including the ambassador, was actually two attacks ­— the first one spontaneous, and the second highly organized and possibly aided by anti-American infiltrators of the young Libya government, a top Libyan security official said Thursday.

KARACHI, Pakistan — The towering metal door at the back of the burned-out garment factory could have been an escape for many of the low-paid textile workers caught in the fire here Tuesday. Instead, it stands as a testament to greed and corruption at a factory where 289 trapped employees died.

PARIS — After just four months in power, the governing coalition of the Socialist Party and the Greens is already marred by deep ideological divisions over energy policy, in particular how quickly and sharply France should move to reduce its heavy dependence on nuclear energy.

WASHINGTON — The Federal Reserve opened a new chapter Thursday in its efforts to stimulate the economy, saying that it intends to buy large quantities of mortgage bonds, and potentially other assets, until the job market improves substantially.

LONDON — More evidence of a weakening global economy emerged Thursday ahead of the Federal Reserve’s decision to take aggressive new steps to stimulate growth in the United States.

This week brought a reprieve from last week’s rain, with clear skies and temperatures in the upper 70°F. Over this weekend, temperatures will become slightly cooler, but the sunny weather should remain.

The smartphone has made us dumb

Going to a restaurant with friends is supposed to be an enjoyable experience. But if it happens to be with smartphone-fanatic friends, then such a trip is not suitable for the weak-hearted. I had to learn this the hard way.

“Jerusalem is and will remain the capital of Israel. The parties have agreed that Jerusalem is a matter for final status negotiations. It should remain an undivided city accessible to people of all faiths.” This statement, taken from the 2008 Democratic Party platform, was removed from the Democrats’ 2012 platform last week, only to be reinstated by President Barack Obama after an onslaught of opposition. Fortunately, Obama made the right decision in reaffirming Jerusalem as Israel’s capital.

During his speech before the Democratic National Convention last week, Barack Obama offered a gem to rival his pledge from his 2008 campaign “moment when the rise of the oceans began to slow and the planet began to heal.” In his words: “We reinvented a dying auto industry that’s back on top of the world.” 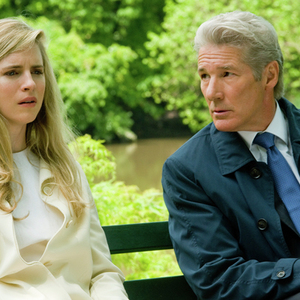 It’s always disturbing to see how quickly money (a lot of it) can persuade people to compromise their morals, and Nicholas Jarecki’s feature-length directorial debut offers a glimpse of this in the form of the glitzy, sometimes seedy, world of high finance. Arbitrage follows the story of Robert Miller (Richard Gere), a 60-year-old hedge fund executive getting ready to retire into full-time philanthropy. But, as in any Wall Street thriller, there are a few catches in the plan: Miller’s a fraud (he’s padding his company’s books with some $400 million of his friend’s money), and he needs to complete the merger of his company before he’s exposed. The stakes become even higher when Miller accidentally becomes involved in the death of his mistress, art gallery owner Julie (Laetitia Casta). A massive cover-up ensues, one that involves Miller keeping his family in the dark and enlisting the help of Jimmy Grant (Nate Parker), the son of a former employee and the only guy who he knows from the other side of town.

Who will take the win? NFL week 2 predictions

After a second place finish at the North Park University Tournament in Chicago last weekend, MIT pushed their winning streak to four matches with an impressive 3–0 win over Clark University in NEWMAC women’s volleyball action on Tuesday evening. 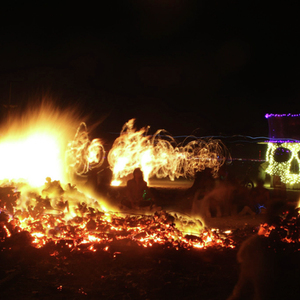 Campus Life out of this world

Burning Man is a weeklong art festival of sorts, held annually in the middle of nowhere: Nevada’s Black Rock Desert. This year the event ran from Aug. 27 to Sept. 3 and was attended by more than 50,000 people. The festival revolved around the art theme “Fertility 2.0.”

How was your Burning Man 2012 experience?

How was your Burning Man 2012 experience?

Christopher Varenhorst ‘09 sits by the embers of the Circle of Regional Effigies (CORE). The Man is surrounded by a ring of 34 wooden effigies, each built by a different regional Burning Man group and burned simultane...
Contributed Photo 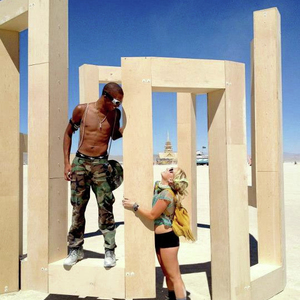 Jason Scott ‘10 and Beth Turner ‘10 enjoy their time on the playa.
Elizabeth Turner 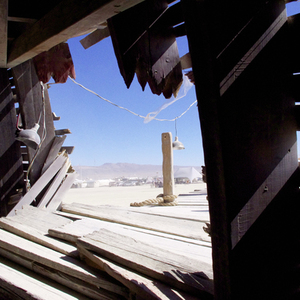 A view out onto the desert from the inside of the Pier.
6Jane Park 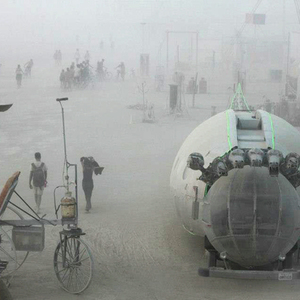 Whiteouts, caused by whirling dust in high winds, were common this year due to the lack of precipitation last winter.
Derek Ouyang 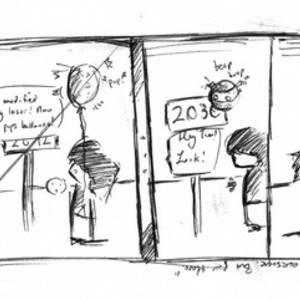 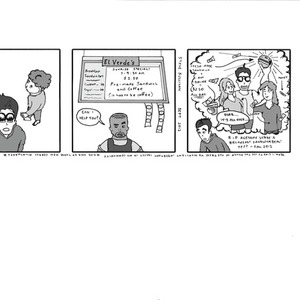 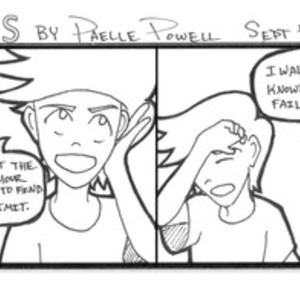 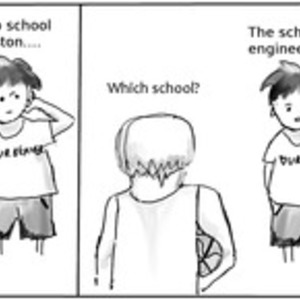 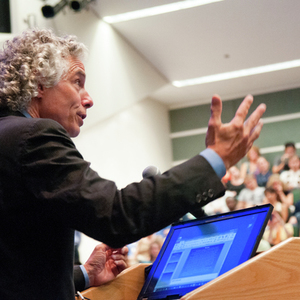 Former MIT professor Steven A. Pinker delivers a talk on “Communicating Science and Technology in the 21st Century,” on Wednesday afternoon in 34-101. The talk, which was the first annual Nuclear Science and Engineeri...
Ekaterina Botchkina 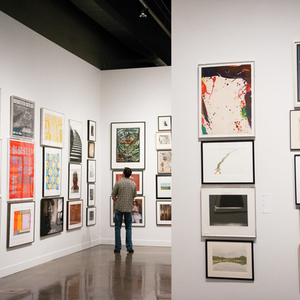 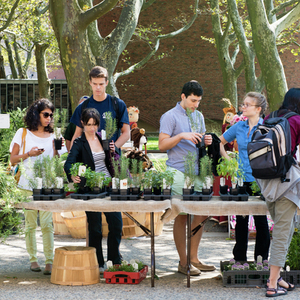 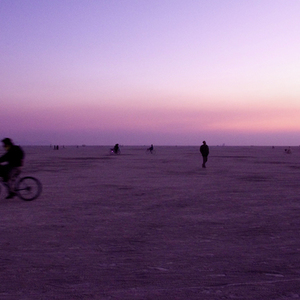 Burning Man participants walk and bike to and fro as the sun sets over the playa.
Jane Park 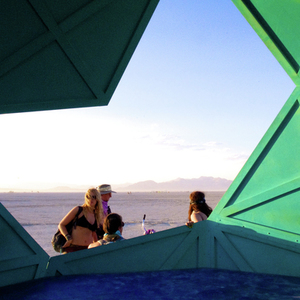 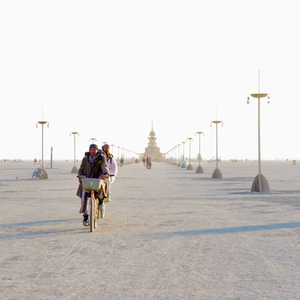 The road from the Man to the temple on the horizon.
Jane Park 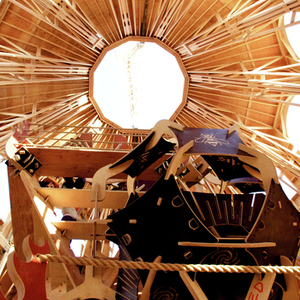 Inside the wooden structure of the Man.
Jane Park
All Photos From Issue