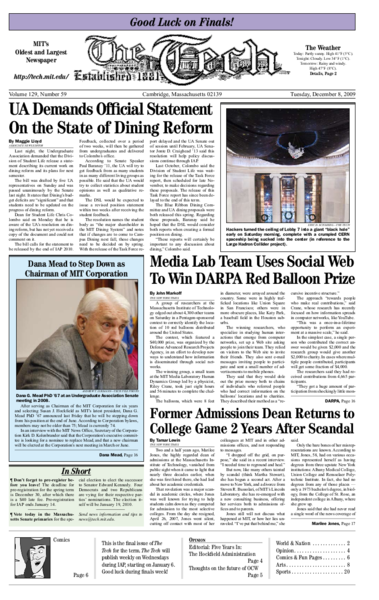 About one fifth of applicants, an unusually large fraction, were rejected outright in this year’s early admissions cycle, which saw a record-high of 5,684 applications and a record-low admit rate of 10.4 percent.

A group of researchers at the Massachusetts Institute of Technology edged out about 4,300 other teams on Saturday in a Pentagon-sponsored contest to correctly identify the location of 10 red balloons distributed around the United States.

UA Demands Official Statement On the State of Dining Reform

Last night, the Undergraduate Association demanded that the Division of Student Life release a statement describing its current work on dining reform and its plans for next semester. 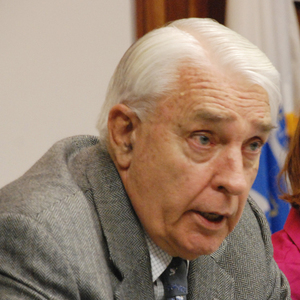 Dana Mead to Step Down as Chairman of MIT Corporation

After serving as Chairman of the MIT Corporation for six years and selecting Susan J. Hockfield as MIT’s latest president, Dana G. Mead PhD ’67 announced last Friday that he will be stepping down from his position at the end of June. According to Corporation bylaws, members may not be older than 75; Mead is currently 74.

Two and a half years ago, Marilee Jones, the highly regarded dean of admissions at the Massachusetts Institute of Technology, vanished from public sight when it came to light that nearly three decades earlier, when she was first hired there, she had lied about her academic credentials.

On a day of angry street clashes, thousands of people rallied against the government on Monday at universities across Iran, defying a wide-ranging advance effort to suppress the protests and bringing a new ferocity to the opposition movement’s confrontation with the regime.

Unveiling significant changes to its dominant search engine on Monday, Google said it would begin supplementing its search results with the updates posted each second to sites like Twitter, Facebook and MySpace.

More than 20 percent of the United States’ water treatment systems have violated key provisions of the Safe Drinking Water Act over the last five years, according to a New York Times analysis of federal data.

An American at the center of an international terrorism investigation has been charged with helping plot the 2008 rampage in Mumbai, India, that left 173 people dead, according to a Justice Department complaint unsealed Monday.

As Dubai World and its creditors steel themselves for tough negotiations over the conglomerate’s debt, some foreign investors say they have enough support to force the company into default and lay claim to its most prized assets.

Do you like cold, rain, and wind? You’re in luck! An intense low pressure system moving through the Great Lakes will trigger a secondary storm that will affect our region tomorrow. Precipitation may start out as sleet or snow due to the cold air currently in place, but will soon change over to rain as warm air is advected in the area. Rain may be heavy at times during the day tomorrow. The wind will also be an issue tomorrow and Thursday, with very blustery conditions much like what we have been seeing recently. After the storm exits, cold air from Canada digs into the region, with lows in the 20s°F and highs in the 30s°F Friday and Saturday.

The Supreme Court on Monday agreed to hear an appeal from a Christian student group that had been denied recognition by a public law school in California for excluding homosexuals and nonbelievers. The case pits anti-discrimination principles against religious freedom.

In the night of December 3, 1984 forty tons of methyl isocyanate, a highly toxic chemical used to produce pesticides, leaked from a chemical plant belonging to Union Carbide (now a subsidiary of Dow Chemical) in Bhopal, India, that by some estimates killed 8,000 people within three days and affected over 500,000 residents of the area. Over 15,000 more people died of the consequences of gas exposure in the years that followed. Today, with the plant’s toxic waste site still not cleaned up, people in Bhopal are drinking very toxic water. Recently published reports from accredited laboratories in Switzerland and the UK found 15 highly toxic chemicals in the groundwater of Bhopal whose levels greatly exceed the safe levels recommended by the WHO, in some cases over a thousandfold. Most of these chemicals could be neurotoxic and damage the brain and other internal organs. The incidence of children born with congenital birth defects linked to their parents’ exposure to the gas is ten times higher in Bhopal than in other localities with matching socioeconomic factors.

Since this is the last week of classes, you undoubtedly have many things to do today. Nevertheless, please take a few minutes to go to your polling location (Kresge Auditorium for most students who live on campus) and vote in the special election primary to choose the next US senator to represent the state of Massachusetts.

OpenCourseWare and the Future of Education

As we are all aware, MIT has and will continue to make relatively large cuts to its budget in light of the recent financial meltdown. The administration established the Institute-Wide Planning Task Force to evaluate ways to make these cuts with minimal impact to the MIT community. One proposal is to cut funding to OpenCourseWare (OCW) or continue funding only until the grant funding that has paid for 72 percent of OCW since its creation runs out. For those not familiar with OCW, it is a brilliant piece of intellectual philanthropy that MIT opened to the public in September of 2002. Essentially, anyone in the world can access the same knowledge and information that MIT students are inundated with by classes. Not just a few classes here and there in the most common disciplines ­— as of May 2006 there were 1400 courses online. This is an unbelievable resource that has been utilized by about 60 million people, both on and off the campus. Twenty years ago, the thought that one could log onto a computer and access nearly the entire curriculum at MIT would be unthinkable. But now it can be done.

During last week’s quarterly meeting of the Corporation, President Susan Hockfield was given a round of applause in special recognition of her first five years of service leading the MIT community. Now, on the cusp of 2010, we as a community can also look back to see where the President has succeeded and where she may need to change her approach in the future.

There is something intrinsically romantic and effortlessly cool about navigating the side streets of Downtown Crossing and slipping into an unassuming old bank building that opens up to the modern and impressive space that is Mantra. The restaurant and lounge specializes in French-Indian fusion but also serves a separate menu of traditional Indian cuisine. Everything about Mantra seems to appeal to a hip, trend-setting crowd, from young students and business professionals to young-at-heart executives. 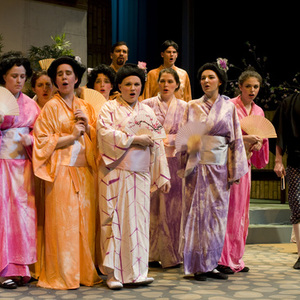 THEATER REVIEW Lose Your Head At ‘The Mikado’

The Gilbert and Sullivan Players’ production of T<i>he Mikado</i> opened last Friday, and it illustrates a few points. First, the Victorian England of Gilbert and Sullivan probably had a very bizarre perception of 19th century Japan, after seeing this show if not before, and second, G&amp;SP seem to be at the top of their game when dressed in kimonos.

Twentieth century music is generally associated with atonality and avant-garde experimentation; this is not necessarily an untrue association, and many of Friday evening’s composers are specially known for their forays into these movements. The music is not without its own narrative, its own tonal lexicon and rationale that somehow culminates in a cohesive thesis. All of Friday evening’s music was older than fifty years old, and it was striking to hear how much of this music has been adapted in to the collective idiom in the twenty-first century. 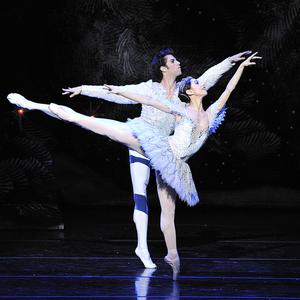 Choreographed by Mikko Nissinen, the Boston Ballet’s rendition of this classic hits all the familiar, comforting notes, while also including a few cheeky details to keep things interesting for perennial attendees. In an effort to trim the show to under two hours (a smart move, considering the number of children both in the corps and in the audience), the action proceeded with a frenetic pace. Act I opens with a Christmas Eve party at the Silberhaus home. Clara’s magical godfather Drosselmeier arrives at the party bearing animated gifts, including a dancing bear unique to the Boston production. (As a figure skating Chewbacca once told me following a performance of Star Wars on Ice, “It is not easy to twirl in a big fur suit.”) Each of his gifts performs a small, cleverly arranged sequence that helps you understand what Toy Story would be like if it were ever adapted for ballet.

I have to preface this review of <i>Brothers</i>, which is based on the Danish film <i>Brødre</i>, with a remark. I’m not a fan of musical manipulation in movies. Overly sappy instrumental music always struck me as unoriginal, as if the director wanted to cover up poor direction or poor acting.

What is an “urbane nomad?” 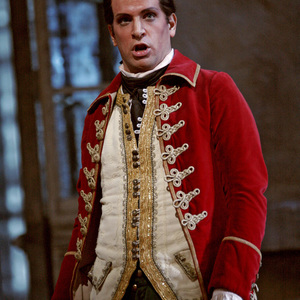 During Thanksgiving weekend, The Metropolitan Opera staged a rousing revival of Mozart’s great comic opera, “The Marriage of Figaro,” that was characterized by uncanny comic timing and keen acting. It wasn’t without a few weaknesses, however, which became apparent when the musical performance failed to match the acting in energy. 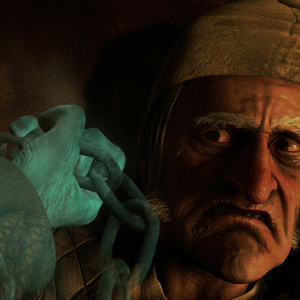 MIT’s powerhouse men’s swimming and diving team dominated the 2009 MIT Invitational held Friday and Saturday in the Zesiger Pool. The Engineers won 17 out of 20 events, recording a score of 1197.5 and easily beating out second-place Tufts University (750.5).

William E. “Billy” Bender ‘12 had a pair of clutch three-pointers, one at the end of regulation and one in overtime, to help lead the MIT men’s basketball team to a 78-73 win over Gordon College Saturday. Noel Hollingsworth ’12 led the Engineers with 28 points and seven rebounds before fouling out late in regulation. Tech is now 8-0, the best start in program history. 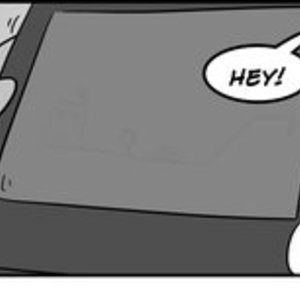 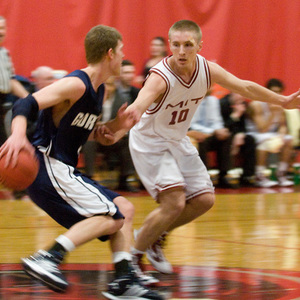 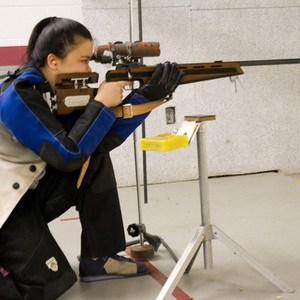 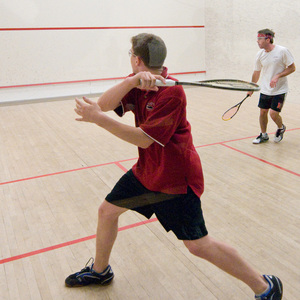 Austin C. Anderson ’12 returns a shot on Saturday at the Zesiger Center squash courts. The Engineers’ match against the Huskies was the last in a triple-header with Tufts University, Middlebury College, and Northeaste...
Vibin Kundukulam—The Tech 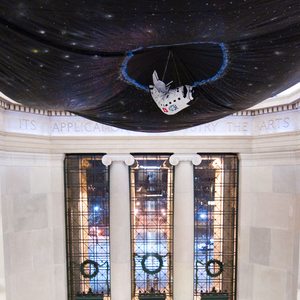 Hackers turned the ceiling of Lobby 7 into a giant “black hole” early on Saturday morning, complete with a crumpled CERN spaceship being sucked into the center (in reference to the Large Hadron Collider project).
Eric D. Schmiedl—The Tech

Dana G. Mead PhD ’67 will retire as Chairman of the MIT Corporation this June. Mead, seen speaking at an Undergraduate Association Senate meeting in 2008, has been Chairman since 2003.
Andrew T. Lukmann—Tech File Photo

The gentlemen and schoolgirls of Titipu accompany Nanki-Poo (in black, right), a traveling minstrel, in song.
Michael T. Lin—The Tech 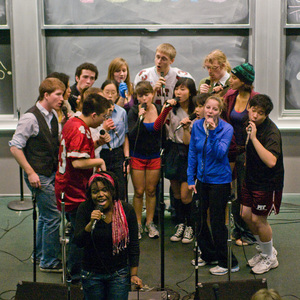 Asha Carter, a freshman from Wellesley, leads the Toons in their rendition of “Can’t Make You Love Me” during their Glee-themed fall concert on December 5 in 34-101.
Oscar A. Viquez Rojas—The Tech 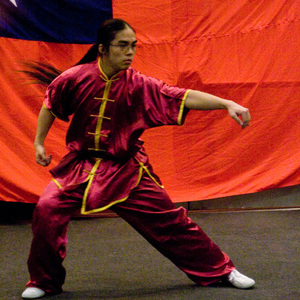 Kevin Hwang ’10 performs with the Harvard Wushu Club in Lobby 13 this past Saturday night at TAI.101, an event run by the Association of Taiwanese Students to educate attendees about Taiwanese culture.
Yuanyu Chen—The Tech 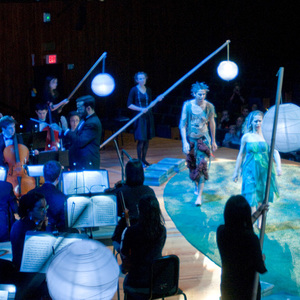 In a stunning weekend performance of Shakespeare’s A Midsummer Night’s Dream, the MIT Symphony Orchestra teamed up with a talented cast of student actors in Kresge Auditorium.
Meng Heng Touch—The Tech
All Photos From Issue