This Valentine’s Day, fall in love with the weather

If anytime over the past 3 months you felt the sun had deserted Boston and run off to frolic in the tropics, you weren’t exactly wrong.

Another week, another rainy nor’easter

The unsettled weather pattern of late is poised to advance Boston’s unusually wet autumn as yet another nor'easter races up the coast Friday night.

A low pressure system is pushing a warm front northwards through New England today, evicting the recent cool, dry air mass and replacing it with much warmer, more humid air.

The recent rainy and at times stormy period culminated Tuesday afternoon in a bizarre sequence of New England autumn tornadoes, the closest of which occurred only about 30 miles south of the MIT campus.

Good weather for Career Fair, another cooldown to come

The weather today will be good for Career Fair activities as a seasonable but breezy and humid air mass overspreads the area in advance of a strong cold front Friday night. 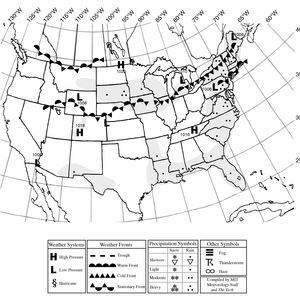 After wreaking havoc across the Carolinas and killing over 20, Florence is finally moving on.

Fall-like weather in the cards

While September typically heralds the beginning of meteorological fall, especially at Boston’s latitude, the weather this year has not shown it.

A brief respite from the heat

As May begins, warm weather is taking over in a big way in the Northeast. Yesterday featured near-record high temperatures around 90 °F (about 32 °C) in much of the region.

We’ll have to wait and see if spring arrives next week and cranks up the CPW weather machine.

By the calendar, we are now several days into astronomical spring. By the frigid weather, however, you’d never know it. The 4th nor'easter in the past 3 weeks is currently pulling away from the Eastern US coast, has brought heavy snow to much of the mid-Atlantic and Northeast. In its wake, atypically cold temperatures will persist, with high temperatures in the lower 40s °F and low temperatures in the 20s. The cold, winter-like weather that has dominated this month shows no signs of leaving anytime soon either. March is on pace to be colder (and snowier) than February, with a mean temperature so far of 35.6 °F (2.0 °C) compared to February’s warmest ever 38.1 °F (3.4°C). March was also warmer than February last year, but this feat had only occurred twice before in the 144-year meteorological record at Boston and is extremely rare for the Eastern US. Nevertheless, it is almost April. Spring is here - the days are getting longer, the sunshine stronger, and there’s only so long Old Man Winter can maintain an icy grip on the region.

We’ve enjoyed good weather over the past few days, but unfortunately it’s still winter — not yet time to bring out the shorts and T-shirts for good.

Taste of spring fades away

Uncertain chance of snow over the weekend

Unusual warmth will envelop the Northeast in advance of an approaching cold front and rain tonight. Highs today will soar into the 50s °F today and remain warm through mid-day tomorrow.

After yesterday’s storm, which brought snow and rain to New England, clearer and calmer conditions will temporarily set up shop over the region today and into tomorrow.

A great start to December

Following yesterday’s brief excursion around 60°F, a weak cold front continues to progress eastward across the Northeast and will move offshore early tomorrow. In its wake, we will experience more seasonable weather with highs in the 40s, lows in the 30s, and no precipitation over the weekend and early into next week. No major weather systems are expected to impact the US before perhaps the middle of next week so enjoy the calm weather and cool, sunny start to December!

Multiple rain chances over the next several days

The Northeast will see several chances for rain over the next several days as a train of low pressure systems moves rapidly across the northern United States and southern Canada.

A weak low pressure system is currently exiting the East Coast; in its wake, cooler, more seasonable weather and sunny skies will dominate today and Friday. This brief return to autumn will be short lived, however, as the unseasonably warm temperatures the Northeast has experienced periodically over the past month will return for the weekend. On Saturday, high temperatures will surge back into the mid-70s with a chance of rain in advance of an approaching cold front. The front should pass through the area late Sunday; in its wake, autumn-like weather will return again, with highs in the 50s and 60s and lows in the 40s for at least the greater part of next week. Although local conditions have been calm, the weather has not been so tranquil across the rest of the United States.

Irma leaves a trail of destruction across the Caribbean, Southeast

Tranquil local weather will continue across the area as the late summer cool down slowly begins.

Rain departs the northeast as Hurricane Irma approaches the US

Irma is currently located just north of Hispaniola in the Caribbean. It is forecast to approach Florida on Sunday before making a sharp right turn to the north and potentially impacting Florida, Georgia, and/or the Carolinas.

Harvey unleashed over 25 trillion gallons of water on Texas and Louisiana; to understand just how much water this is, consider that if this volume was placed on MIT’s campus, it would extend about 140 kilometers into the sky.

Rain returns to the northeast

Cloudy skies today will lead to rain chances tomorrow as a low pressure system pushes east towards the region. Unlike other recent rain events, this system will prove too weak to displace the cool air over the region. As a result, no significant warm up will occur prior to its passage. Cool air became firmly entrenched in the Northeast over the last several days as a backdoor cold front slid inland from the coast. This airmass will persist for quite some time, since no significant system is poised to push it out anytime soon. Thus, highs in the 50s fahrenheit and lows in the 40s can be expected for the next several days as Spring’s gradual warming trend is slowly realized.

Across the region, relatively mild conditions will persist, with partly cloudy skies and high temperatures in the mid to upper 40s through the weekend as high pressure settles across the region. This calm period will not last long, however, as a powerful storm system is forecast to develop across the deep south over the weekend and move toward the Northeast early next week. Across the west, heavy rain and snow continue to pound the region; only 65 percent of California remains in a drought, down from 100 percent just three months ago. Incredibly, only 2 percent remains in exceptional drought, down from 21 percent and 42 percent three months and one year ago respectively.

Sunny and calm locally; first winter storm of the season in north-central U.S.

Clear skies and abundant sunshine will bring moderate temperatures and calm winds to the region through this weekend. High temperatures will remain slightly above normal in the upper 50s in advance of an incoming low pressure system from the west. That system will be this year’s first significant winter storm in the continental United States and is poised to bring heavy snowfall and possible blizzard conditions to much of the High Plains and Upper Mississippi Valley. In conjunction, a cold front will sweep across the central and eastern United States, bringing a chance of showers followed by much cooler weather to most locations.

Cooler weather for the weekend, warmer next week

An autumn front is poised to bring cooler temperatures and clear skies to New England this weekend. Following today’s clouds and showers, cold crisp air will be ushered into the region on strong gusting breezes from the north and northwest. The cooler weather will be accompanied by strong high pressure and light winds that could allow temperatures to drop near or into the 30s F on Friday and Saturday nights.

Cooler, seasonable conditions will overspread the region in the wake of Wednesday’s cold front. That front brought isolated but much-needed rain to Eastern Massachusetts, which remains in the midst of a persistent severe drought. Locally, clear skies and high temperatures in the mid 70s will persist into the weekend before another system approaches from the west by Sunday, bringing a cold front and another opportunity for precipitation. Near the Carolina coast, minimal Tropical Storm Julia will continue to meander, bringing squally weather and heavy rain to coastal regions. Julia is forecast to remain weak and nearly stationary over the next several days before weakening and moving onshore. Elsewhere in the nation, rain and thunderstorms will overspread the Plains as a developing system organizes over the central United States and progresses quickly eastward. Otherwise, calm weather and clear skies will be the norm across much of the country as the Autumnal Equinox approaches.