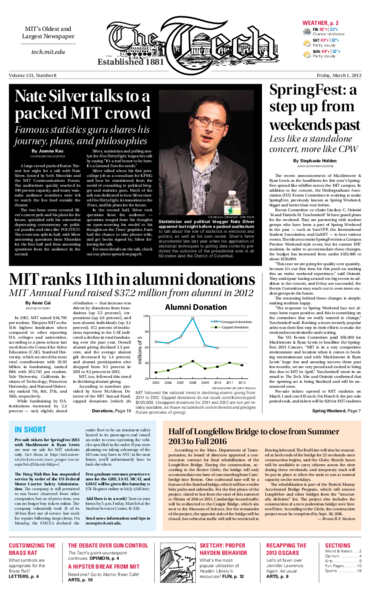 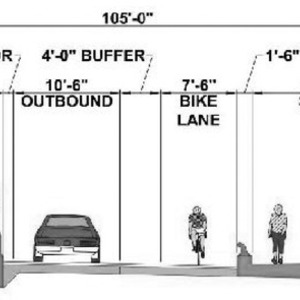 According to the Mass. Department of Transportation, its board of directors approved a construction contract for final rehabilitation of the Longfellow Bridge. During the construction, according to the Boston Globe, the bridge will only accommodate one lane of cars traveling from Cambridge into Boston. One outbound lane will be a feature of the finished bridge, which will have wider bike paths and sidewalks. For the first phase of the project, slated to last from the start of this summer to Winter of 2014 or 2015, Cambridge-bound traffic will be redirected to the Craigie Bridge, which sits next to the Museum of Science. For the remainder of the project, the opposite side of the bridge will be closed, but vehicular traffic will still be restricted to flowing inbound. The Red Line will also be truncated at both ends of the bridge for 25 weekends once construction begins, said the Globe. Shuttle buses will be available to carry citizens across the river during these weekends, and temporary track will be put in place to allow the train to run at normal capacity on the weekdays. 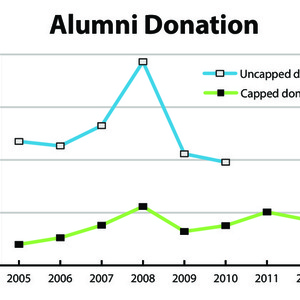 In 2012, MIT raised $34,795 per student. This puts MIT as the 11th highest fundraiser when compared to other reporting U.S. colleges and universities, according to a press release last week from the Council for Aid to Education (CAE). Stanford University, which received the most total contributions with $1.03 billion in fundraising, ranked fifth with $55,745 per student. Yale University, California Institute of Technology, Princeton University, and Harvard University ranked 7th, 8th, 17th, and 18th, respectively. 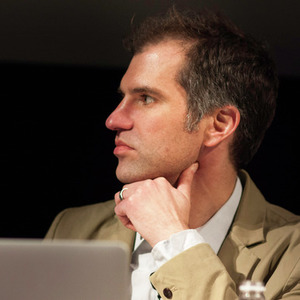 A large crowd packed Bartos Theater last night for a talk with Nate Silver, hosted by Seth Mnookin and the MIT Communications Forum. The auditorium quickly reached its 190-person capacity, and many wannabe audience members were left to watch the live feed outside the theater.

Linked genetic base for mental illnesses

The psychiatric illnesses seem very different — schizophrenia, bipolar disorder, autism, major depression and attention deficit hyperactivity disorder. Yet they share several genetic glitches that can nudge the brain along a path to mental illness, researchers report. Which disease, if any, develops is thought to depend on other genetic or environmental factors.

SpringFest: a step up from weekends past

The recent announcement of Macklemore &amp; Ryan Lewis as the headliners for this year’s SpringFest spread like wildfire across the MIT campus. In addition to the concert, the Undergraduate Association (UA) Events Committee is working to make SpringFest, previously known as Spring Weekend, bigger and better than ever before.

A Conversation with Nate Silver: Baseball statistician turned political blogger talks about politics, statistics, and the media. Silver founded the FiveThirtyEight blog to predict political elections in 2008. His success in political forecasting led to his working with the New York Times, and in 2012 he correctly predicted the results in the U.S. presidential election for all fifty states and the District of Columbia. The talk, at the MIT Media Lab, was moderated by Seth Mnookin, a former baseball and political writer. Mnookin now co-directs MIT’s Graduate Program in Science Writing.

Pre-sale tickets for SpringFest 2013 with Macklemore & Ryan Lewis are now on sale for MIT students only. Get them at http://mit.universitytickets.com/user_pages/event.aspx?id=251&cid=36&p=1.

In the movie Groundhog Day, Bill Murray plays a weatherman who is stuck in a loop, seemingly doomed to repeat the same day of his life over and over again.

Breathe a tiny sigh of relief, if not exactly contentment: the U.S. economy grew just barely in the last quarter of 2012.

CHICAGO — Michelle Obama announced the name of the best picture via satellite for the Academy Awards ceremony in order to promote the arts among children, her principal constituency, she said in an interview on Thursday. And if people did not like it, she added, that does not bother her.

BRUSSELS — The man who represents the 27 leaders of the European Union warned Thursday of widespread opposition to steps that may be necessary to keep Britain as a member of the bloc.

In a first, experiment links brains of two rats

In an experiment that sounds straight out of a science fiction movie, a Duke neuroscientist has connected the brains of two rats in such a way that when one moves to press a lever, the other one does, too — most of the time.

WASHINGTON — If the Supreme Court strikes down or otherwise guts a centerpiece of the Voting Rights Act, there will be far less scrutiny of thousands of decisions each year about redrawing district lines, moving or closing polling places, changing voting hours or imposing voter identification requirements in areas that have a history of disenfranchising minority voters, voting law experts say.

DHAKA, Bangladesh — Violent clashes between angry mobs and security forces erupted across Bangladesh on Thursday, leaving at least 35 people dead, after a special war crimes tribunal handed down a death sentence to a fundamentalist Islamic leader for crimes against humanity committed 42 years ago, during the country’s 1971 war of independence from Pakistan.

The best protection from guns is one of your own

“You know, we wouldn’t be nearly as panicked if we all had guns.”

Data and morality support the need for gun control

The United States already has the highest rate of gun ownership in the world. There are about 89 guns per 100 citizens, and in 2011, 34 percent of adults owned a gun and 47 percent of adults live with a gun in the house. The United States also ranks eleventh worldwide in total firearm-related deaths, with not a single country ahead of us categorized as “developed” by the United Nations. Given this data, how is there any reasonable expectation that giving even more guns to Americans will somehow lower the rate of firearm-related deaths? 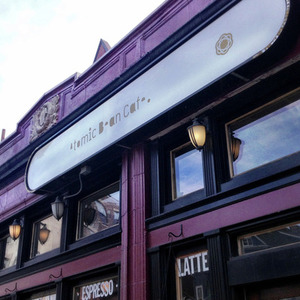 HIPSTER COFFEE CAFÉ Where to go when you need a break

When I need a thoroughly non-MIT place to escape to, Atomic Bean Café is one of my favorite places ever. Tooling may be a way of life but I too, need my regular dose of free WiFi, delicious espresso, and even ridiculous pastries made with kale. 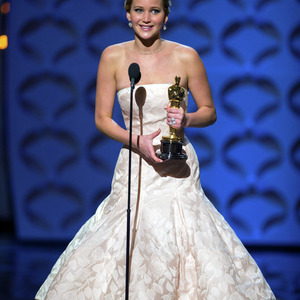 I have not missed a single Oscars award ceremony since 2002, and as a devoted viewer, it’s no surprise that I watched them again this year. Feb. 24, 2013, marked the 85th presentation of the annual Academy Awards to highlight cinematic achievements. The red carpet leading into the Dolby Theatre (formerly the Kodak Theater) held the attention of the public as celebrities sauntered down its length adorned in luxurious evening gowns and smartly tailored suits. My favorite dresses this year was one worn by Amanda Seyfried, designed by Alexander McQueen, and another worn by Jennifer Lawrence, designed by Dior. Both of these gowns were white, and decorated with subtle, intricate floral patterns. The Dior dress resembled a huge layered cake, carefully iced around the edges.

At its second match of the 2013 portion of the season, the MIT men’s tennis team had a convincing 9-0 victory over Eastern Nazarene College inside the Carr Tennis Bubble at home on Tuesday afternoon. The Engineers improved to 4-0 on the season, while the Lions fell to 0-2.

Basketball to play for DIII title

It was good news for the MIT men’s basketball team on Monday when the Engineers heard their name called as the recipient of an at large bid to the 2013 NCAA Division III Men’s Basketball Tournament. It will be the fifth consecutive season that MIT has played in the tournament, which includes a memorable run to the NCAA Final Four a year ago. The Engineers, ranked No. 24 in the final regular season poll by D3hoops.com, will play a first round game on Saturday, March 2 at No. 12 ranked St. Mary’s College in Maryland.

The Oscar for best actress goes to Jennifer Lawrence, for her role in Silver Linings Playbook.
Courtesy of Michael Yadda/©A.M.P.A.S.

This graphic was presented last March, as part of a contract update, showing one of the proposed layouts of the outbound side of Longfellow Bridge. During construction, half of the bridge will be closed at a time, and...
Massachusetts department of transportation 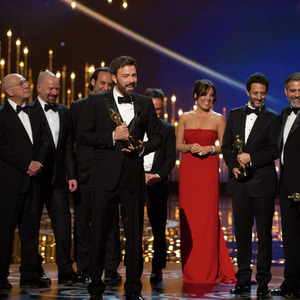 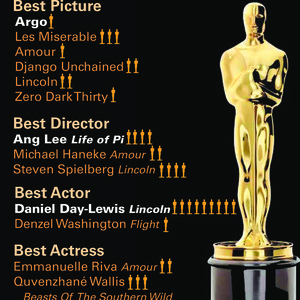 Ten members of The Tech’s Arts Department attempted to predict the Academy Awards, à la Nate Silver. We weren’t quite on target.
Infographic by Annia Pan 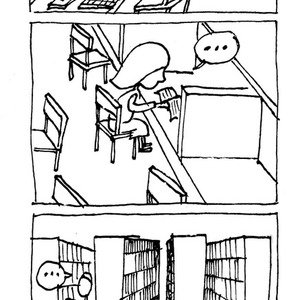 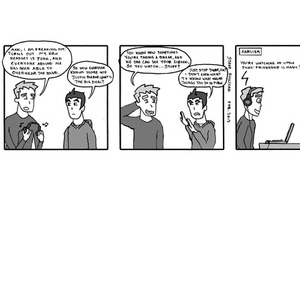 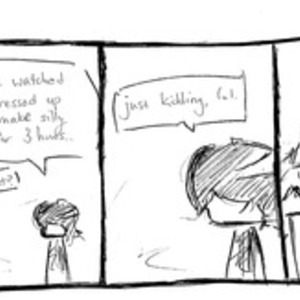 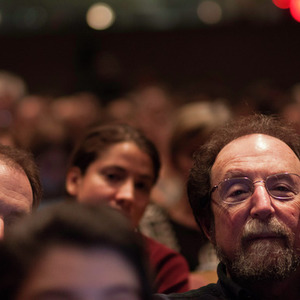 The event was held in the Bartos Theater in the basement of E15 (the Weisner Building/old Media Lab). The auditorium’s near-200 person capacity was exceeded before the event began; some audience members were left stan...
nicholas chornay—The Tech 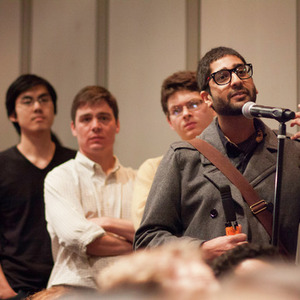 Audience members had a chance to ask Silver questions during the second half of the event. Question topics ranged from digital journalism to the future of Silver’s career. When asked about would happen when other medi...
nicholas chornay—The Tech 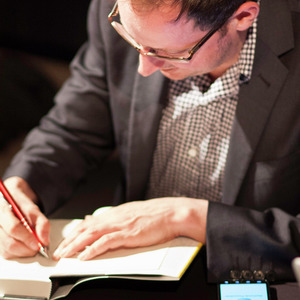 Nate Silver signed copies of his New York Times bestselling book The Signal and the Noise for audience members following his talk. Many audience members brought their own copies, but the book was also offered for sale...
Nicholas Chornay—The Tech

MIT followed the national trend in declining alumni giving from 2011 to 2012. Capped donations do not count contributions past $100,000. Uncapped donations for 2011 and 2012 are not yet reliably available, as those in...
infographic by judy hsiang 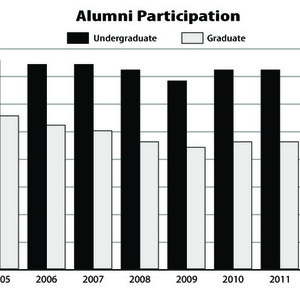 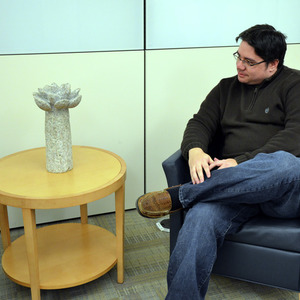 This spring, a 30-pound hand-carved pink granite sculpture has come to MIT. The nomadic piece changes title according to its location, and is currently titled “I am Mit, as I am in Mit, just like a lot of other people...
Courtesy of Mark Linga 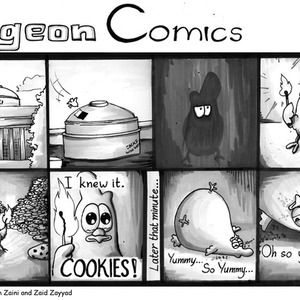 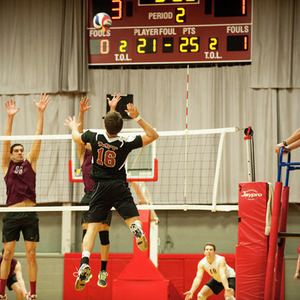 MIT’s Alexander C. Klein ’15 prepares for a spike against Springfield College’s Greg Falcone. MIT was tied against the first ranked Springfield, but eventually lost in the fifth set at a close 12-15.
Vanessa Trevino 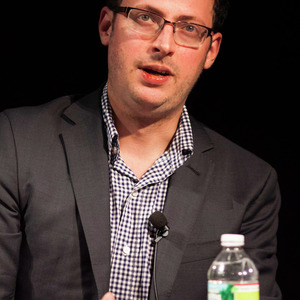 Statistician and political blogger Nate Silver appeared last night before a packed auditorium to talk about the role of statistics in elections and politics, as well as his own career. Silver’s fame skyrocketed late l...
Nicholas Chornay—The Tech 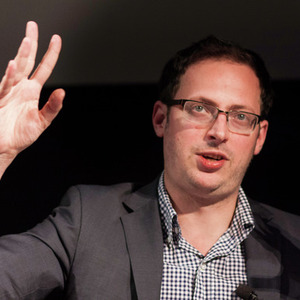 Much of the talk focused on the development on FiveThirtyEight, its beginnings at the New York Times, and Silver’s thoughts on its future. In 2007, Silver felt that politics was still “stuck in the stone age and not...
nicholas chornay—The Tech
All Photos From Issue