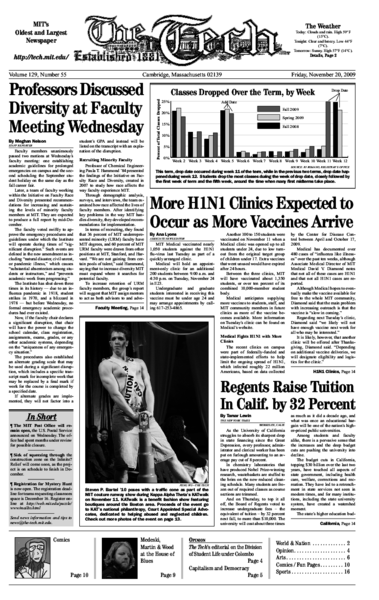 As the University of California struggles to absorb its sharpest drop in state financing since the Great Depression, every professor, administrator and clerical worker has been put on furlough amounting to an average pay cut of 8 percent.

Faculty members unanimously passed two motions at Wednesday’s faculty meeting: one establishing academic guidelines for prolonged emergencies on campus and the second scheduling the September student holiday on the same day as the fall career fair.

New guidelines for cervical cancer screening say women should delay their first Pap test until age 21, and be screened less often than recommended in the past.

The commander of military forces protecting North America has ordered a review of the costly air defenses intended to prevent another Sept. 11-style terrorism attack, an assessment aimed at determining whether the commitment of jet fighters, other aircraft and crews remains justified.

Flights over much of the eastern United States were delayed Thursday by a predawn failure in a fairly new communications system, which led to the shutdown of a computer that accepts flight plans from the airlines and feeds them to air traffic controllers.

The Senate version of health reform legislation would cover 5 million fewer people than a companion bill passed by the House, but it would cost less, in part because Senate Democratic leaders said they believed they had to win support from fiscally conservative members of their party.

First the reviled Yankees won the World Series; now Shake Shack, the New York burger joint, might stake a claim in one of Boston’s most sacred spaces.

A Medical Culture Clash of Science and Practice

This week, the science of medicine bumped up against the foundations of American medical consumerism: that more is better, that saving a life is worth any sacrifice, that health care is a birthright.

Rise to the Occlusion

Today’s weather will be influenced by the passage of an occluded front, as the center of a low pressure system passes to our north. An occluded front is formed in a mature cyclone (low pressure system) when the cold front associated with the system overtakes the warm front, causing the two fronts to merge. Unlike a cold or warm front, an occluded front usually does not result in a large temperature difference at the surface upon its passage, since there is relatively cold air on either side of it. However, there is often a pocket of warm air pushed aloft in association with the occluded front, which can lead to precipitation along the frontal boundary.

Do you think that social networking tools like Facebook and MySpace are eliminating the need for real social interaction? I was doing an Internet survey the other day that was about interactions with close friends — something along the lines of, “list your top five friends, and then list the last way you communicated with them.” For me, few of my closest friends live in the same city as me, so my answers largely involved some form of electronic communication — e-mail, instant messaging, text messaging and others.

Capitalism and Functioning Democracy Are at Odds

The fundamental debate is whether the right to increases in capital and property supersedes the right to equality, i.e. the right to equal access to labor and life. If the two rights are considered absolute they cannot coexist; one destroys the other (per “What is Property” by French anarchist Joseph-Pierre Proudhon).

The solution for the sudoku in Tuesday’s issue was incorrect. The correct solution is printed here, to the right.

Are You There Chris? It’s Us, Students.

In August 2008 the newly-appointed Dean for Student Life Chris Colombo told <i>The Tech</i> that “there is a process where the conversation goes both ways” in regards to student life policy. However, this vital communication pipeline has been ineffectual or broken down in a number of areas since Dean Colombo took office last year.

Lobby 7 is already a beautiful architectural space, to which the apparently empty plinths (waiting for the viewer’s imagination, or the viewer’s person, to fill them in) contribute greatly. Putting in statues, even classical ones in keeping with the Roman feeling of the lobby, would detract from the effect; worse yet would be inserting artwork so trendily contemporary as to turn one of the main entrances to the Institute into a permanent display of one decade’s taste.

Senate met on Monday, November 16. Additions to Summer/Fall 2009 Finance Board Appeals were passed, and 41 U.A.S. 6.3: Fresh Fund Allocations allocated money from the Fresh Fund to many newly-recognized student groups. The 2013, 2012, and 2011 Class Council budgets were also approved by Senate. 41 U.A.S. 6.4: Re-Charging the Enrollment Committee, a bill to re-charge the UA Committee on Enrollment in light of the likely increase in enrollment, was passed. Two bills regarding the procedure to nominate a student to a position on an Institute Committee, 41 U.A.S. 6.1: Applicability of Nominations Committee Process and 41 U.A.S. 6.2: Nomination Process for Ex Officio Members of Institute Committees, were presented, but both will be voted on at later meetings. Finally, summaries of the past three years of Senate prepared by the UA History Committee were approved.

Have you ever seen an eight-year-old child headbanging? Ever had a bearded, screaming stranger claim that he could be your own personal therapist? Ever seen an eleven-year-old wearing a shirt declaring that “The All-American Rejects Are Really Good Looking”? If so, you probably need professional help, but you might also have attended Taking Back Sunday and the All-American Rejects’ concert at the intimate Showcase Live last week.

Art is a sensual experience in each of its forms.

Taking Back Sunday guitarist and backup vocalist Matthew Fazzi took a minute to talk to <i>The Tech</i> about joining the band and the current tour.

The Boston Choral Ensemble prepares for its 2009–2010 season featuring Thomas Jennefelt’s <i>Villarosa Sequences</i> on Friday, November 20 at First Church in Cambridge and Sunday, November 22 at Old South Church in Boston. <i>The Tech</i> interviewed conductor Miguel Felipe about the upcoming program. More information about this performance and the Boston Choral Ensemble can be found at <i>http://www.bostonchoral.org/</i>

What is God? The question begs an answer for which generations of human beings have waged war against one another to prove themselves correct. And yet, the answer is still out there, waiting for the reconciliation between beliefs before making a universal debut.

INTERVIEW ‘Oh My God!’ Director Talks with ‘The Tech’

Peter Rodger is an award-winning British director whose unique photo-imagery craftsmanship makes him one of the most sought-after artists in the British and American advertisement industry. <i>Oh My God!</i> is the three year, life-changing non-fiction film that explored peoples’ perspectives about God which debuted on November 13.

The sold out Paradise Rock Club filled up early in preparation for Tuesday night’s Concert. The youngish crowd, a veritable hipster-bingo board of plaid, alt-girl headbands, and greasy faux-hawks, could probably have contributed enough optical strength with their combined square-rimmed glasses to focus the death star. Similarly hip, the Brooklyn-based Dirty Projectors took the stage to crowd calls of “let’s get dirty!” and vigorously belted out their unique, soaring rock music.

Seven Engineers were honored by the New England Football Conference for their achievements both on and off the field. 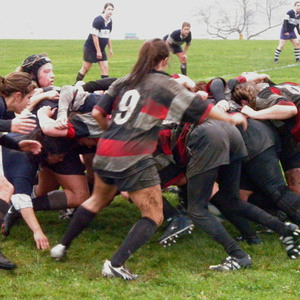 Playing through monsoon-like rain and ankle-deep mud, MIT Women’s Rugby inched up the field against tough opposition from Middlebury at the New England Championship game in Newport, RI on Saturday. MIT controlled the ball for most of the game. With a try in the first half and another plus a penalty in the second, MIT won with a score of 13-0. Next up for the team is the National Championships in Cherry Hill, NJ this weekend.<i></i>

The MIT women’s rugby forwards drive a scrum while scrum-half Alyssa M. Baccarella ’11 prepares to collect the ball during the Engineers game against Middlebury last Saturday. MIT won the game, making them the New Eng...
Courtesy of the MIT Women’s Rugby Team 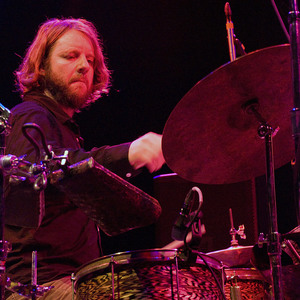 Drummer Billy Martin announced the upcoming release of the Medeski, Martin & Wood “Evolutionary Box Set,” which includes three of the group’s latest releases, a DVD, a live album, and a remix album among other treats ...
S. Balaji Mani—The Tech 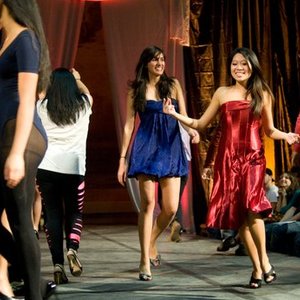 Models storm down the runway one last time as they end the sequence of clothing from American Apparel during Kappa Alpha Theta’s KATwalk on Veterans Day.
Feng Wu—The Tech 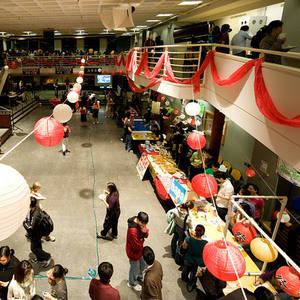 The Night Market; organized by the MIT Asian American Association, the Association of Taiwanese Students at MIT, and the MIT Chinese Students Club; took place in Lobdell on November 14. The venue was decorated with Ch...
Meng Heng Touch—The Tech 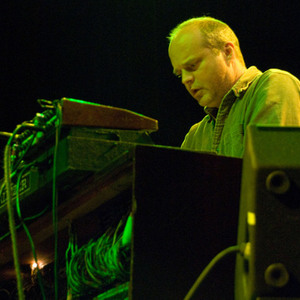 John Medeski of Medeski, Martin & Wood stands up to solo one of his many keyboards on November 13 at the House of Blues. In concert, he’s typically surrounded by a collection of old organs, electronic keyboards, and e...
S. Balaji Mani—The Tech 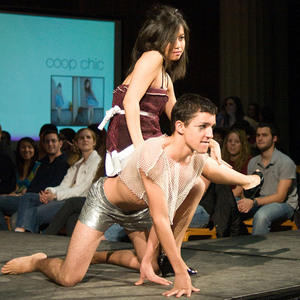 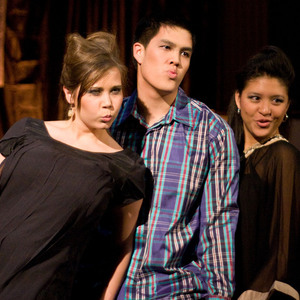 Breanna D. Berry ’12, Timothy R. Lee ’11, and Chrystelle Kiang ’13 pucker their lips in a pose for the Shubrah fashion segment during Kappa Alpha Theta’s KATwalk on November 11. Shubrah is an eco-friendly brand that b...
Feng Wu—The Tech 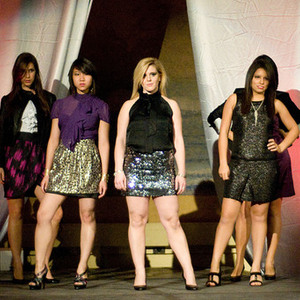 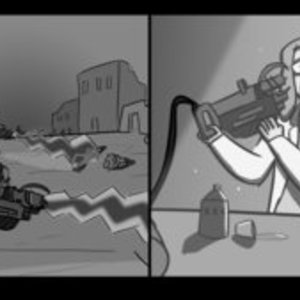 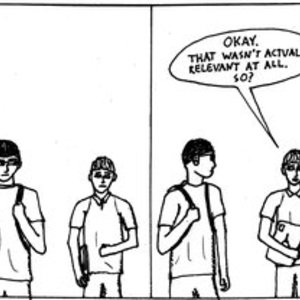 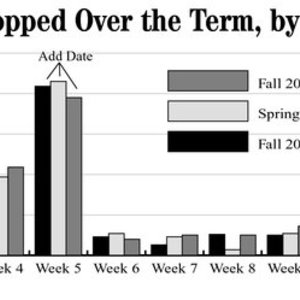 This term, drop date occurred during week 11 of the term, while in the previous two terms, drop date happened during week 12. Students drop the most classes during the week of drop date, closely followed by the first...
SOURCE: Ri Romano, Registrar’s Office 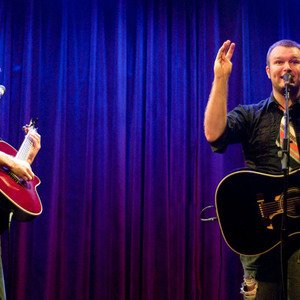 Ryan Green (left) and Cameron Hood of Ryanhood put on a concert at Cafe 939 at Berklee on Saturday night. Cameron encourages the crowd to sing along as Ryan strums his guitar. The pair, who began performing on the str...
Feng Wu—The Tech 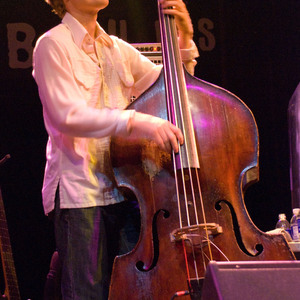 Bassist Chris Wood from Medeski Martin & Wood played on November 13 at the House of Blues. Wood will return to Boston to perform with his brother on December 8 at the Paradise Rock Club.
S. Balaji Mani—The Tech 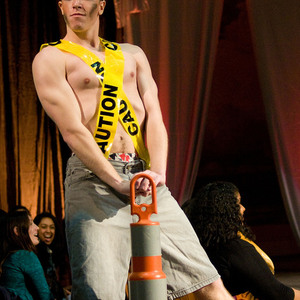 Steven P. Bartel ’10 poses with a traffic cone as part of the MIT couture runway show during Kappa Alpha Theta’s KATwalk on November 11. KATwalk is a benefit fashion show featuring boutiques around the Boston area. Pr...
Feng Wu—The Tech
All Photos From Issue